When it comes to a new Vikings stadium in Minneapolis, one of Mayor R.T. Rybak’s big selling points is property tax relief. The gist: Target Center’s subsidy — which now comes in part from the property taxes — would shift to Convention Center sales taxes that would also fund Wilf Field.

Last week, an unimpressed City Council heard Rybak tout his plan, but without specific numbers. Wednesday, Council Member Lisa Goodman received a one-sheet prepared by the consultant with Rybak, Mark Kaplan of 35W Financial. Although it is full of hedges and caveats, Kaplan says a first look turns up $191 million in property tax relief over the 30-year-life of the Vikings stadium — roughly $5 million annually in present value.

That’s not chump change; the city took in around $168 million in property taxes in 2011, and $5 million would work out to about a 3 percent annual spiff. 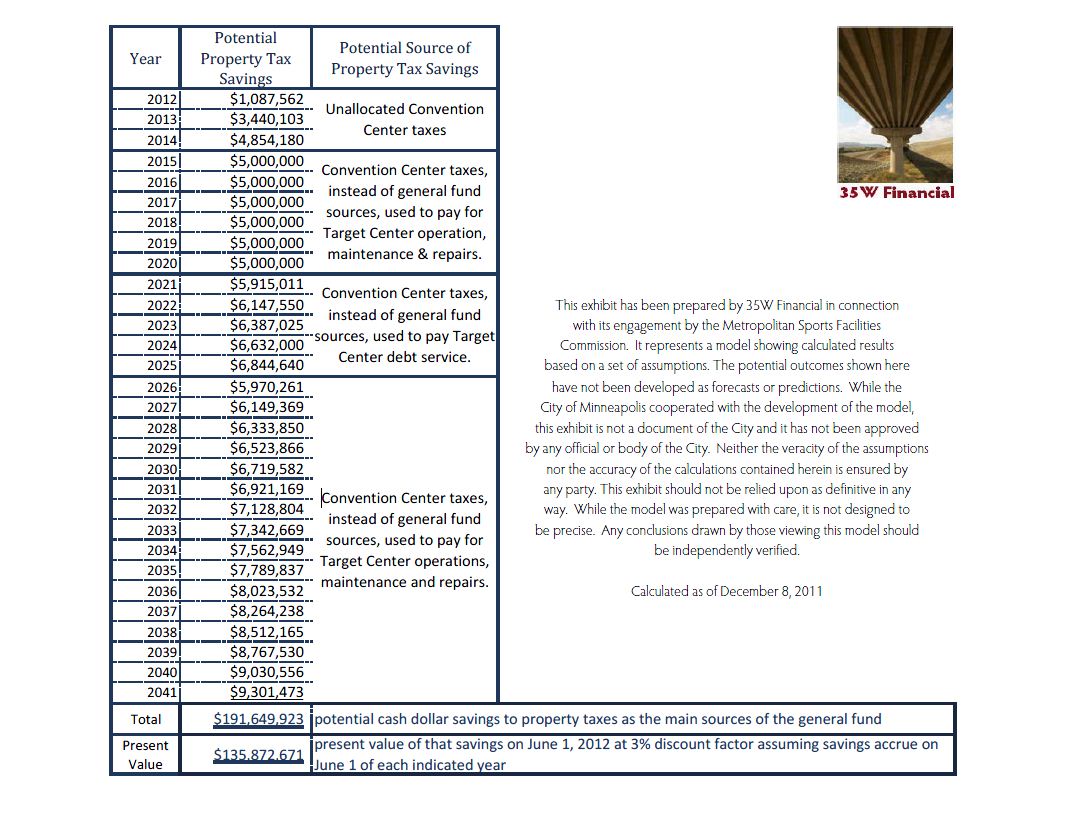 But the caveats are important. Kaplan prepared his work for the Sports Facilities Commission; Chuck Lutz, deputy director of Minneapolis community development agency CPED, told Goodman, “Please bear in mind that as we get additional financial data from Finance and the Convention Center, the numbers in the overall model, which include potential property tax savings, continue to change.”

One way the model touches $191 million: Kaplan assumes Target Center still exists in 2041, when the unloved building would be 51 years old. Of course, Rybak is touting a $155 million update that would move the Timberwolves to extend their lease past the current 2025 expiration date. For now, owner Glen Taylor hasn’t committed to a specific time frame.

It’s also important to note that following a 2009 law change, the sales tax is a remarkably flexible financial instrument the city can tap for “residential, cultural, commercial, and economic development in both downtown Minneapolis and the Minneapolis neighborhoods” once Convention Center needs are paid for.

Are Minneapolis finances best served by tying that tax up for the next 30 years in sports stadia — or is there “economic development” that could produce more jobs, more tax base, and ultimately more property tax relief? That’s one question Council Members, and citizens, should be asking.

How much could a Vikings stadium cut Minneapolis property taxes?