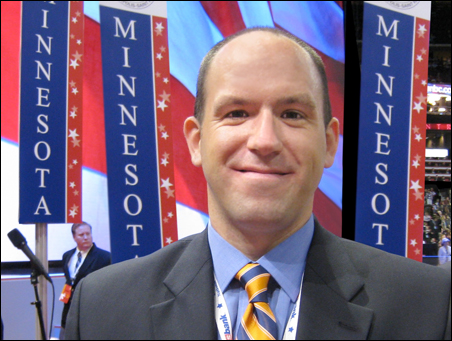 mngop.com
Schadenfreude is impatient, especially for those who hate Michael Brodkorb’s scorched-earth politics.

The emailer noted Koch resigned, then “Brodkorb was canned. Why is the connection not made? Sure, the reader can infer, but reporters are supposed to save them the trouble. If the media are worried about libel, it is timidity at its worst.”

The writer is not some knee-jerk mainstream media basher — he’s Bob Whereatt, retired political reporter for the Pioneer Press and Star Tribune, who put as much time in the Capitol basement press offices as anyone alive today.

Near as I can tell, only two local media outlets have directly acknowledged the omnipresent chatter and circumstances raising the possibility of a Brodkorb-Koch relationship. On Friday, when Brodkorb was fired, City Pages headlined an item “Was it Michael Brodkorb?,” following three days later with an Eagan police report involving a June domestic dispute for which the Senate staffer wasn’t charged.

Michel’s answer likely provides some insight into why the Star Tribune, Pioneer Press, MPR, Associated Press and MinnPost have not broached the subject: No one has confirmed it. “The law prohibits me from talking about any specific Senate employees or even former Senate employees,” Michel replied. “So there’s a legal process that will surround that.”

I say “likely provides some insight” because the Strib, PiPress and MPR did not respond to an email asking for their thinking on rumor reporting; AP bureau chief Dave Pyle replied simply: “In this case, we’ll let our coverage speak for itself.”

I asked Chris Ison, a Pulitzer-winning former Star Tribune investigative reporter now teaching at the University of Minnesota, what he would do here.

“I’ve been fascinated by how careful the media have been,” Ison says. “I have always been pretty conservative in these situations. If I don’t have it, I don’t have it. If circumstances make me 99.5 percent sure, but no person or document says it directly, I still don’t have it.

“I can use those circumstances to try to leverage someone to give it to me. But if no one will, I’m stuck. I don’t make that tiny leap based on circumstantial evidence. It’s somewhat of a principle — Don’t say what you don’t know. Don’t guess or assume. But it’s also pragmatic — I’ve seen reporters get burned when they take what seem to be tiny, safe leaps.  I still have to get someone to say it directly, or find a document to show it,” he concludes.

City Pages editor Kevin Hoffman makes the competing case for headlining the question: “We decided to ‘go there’ because the public was already going there (as you know from watching Twitter). I don’t think reporters have the luxury of playing dumb in this day and age.”

But the “people talking” rule would let the media publish any rumor — with harm to a publication’s reputation and to a possibly innocent person. So why did this rumor make the cut?

“This case was the exception rather than the rule,” Hoffman answered. “This was a major story of public interest where action had already been taken in the form of two people being removed from positions of leadership. We would not have printed the allegation if had simply been passed along by an anonymous source with no supporting evidence.”

CP is known as a few-holds-barred operation; MinnPost isn’t. So I asked my editor, Joel Kramer, whether merely broaching the subject in this column would violate our standards.

“The newsworthy question here is: Why was Brodkorb fired? Given that he was fired a day after Koch resigned, the connection makes this different from a run-of-the-mill rumor,” Kramer replied.

“In these circumstances, addressing the linkage is appropriate — as long as we make it clear that we do not know for a fact that Brodkorb was the man in the relationship with Koch.”

So why can’t the Strib, PiPress, MPR and AP do just that?

Some, like ex-Strib columnist Nick Coleman say the media lacks “guts,” contending that it “could happen” that “media types at the Capitol sat on [the] story cuz they didn’t want to burn GOP bridges.” To me, that’s ludicrous: anyone who knows Pat Kessler, Tom Scheck or several other Capitol reporters knows they’ve grabbed onto this with both jaws.

Scheck and MPR’s Catharine Richert advanced the story Wednesday, reporting that former Senate staffer Cullen Sheehan told leaders about the situation in September. But even then, Sheehan wouldn’t disclose the name of the staffer involved.

Says Ison, “The odd thing is, when there’s as much circumstantial evidence as there is in this case, and so many people know what happened, a reporter almost always can get someone to tell them directly, even if it’s on a not-for-attribution basis. I give credit to the reporters for not taking the leap here, assuming that nobody with direct knowledge will say it. But I’m amazed they can’t get somebody to say it.”

Perhaps the current reluctance shows confidence, not timidity. I’d wager this thing will grind out like a “Law and Order” procedural: Reporters know in their bones they will crack this case, and are willing to hold out for the sort of rock-solid sourcing MPR displayed Wednesday.

There are definite risks to publishing an allegation, even in the form of a question: legal, journalistic and moral. Is the reward all that great? I’d argue it isn’t. Schadenfreude is impatient, especially for those who hate Brodkorb’s scorched-earth politics, but the famous case of the Watergate reporting mistakes shows how incaution can mar a major investigation.

You can decide if City Pages, Murphy and now I have appropriately “addressed the linkage” while not asserting a possible relationship as fact. (CP’s publication of the Eagan police report may heighten the inference, but at least they relied on a documented fact.)

As for those playing it closer to the vest, I think there are times when journalists pull punches to preserve access, but I don’t think an irresistible story like this is one of those times. I can’t condemn the dogged fact-hunters for keeping their eyes firmly on the prize.