Forum Communications owns more Minnesota newspapers than anyone else*, so the chain’s freshly-announced Upper Midwest news service could be big news for statewide readers … especially those in Duluth, Bemidji, East Grand Forks, Moorhead, Willmar and the many ‘burbs, exurbs and small towns that host Forum’s 32 papers, four TV stations and 200-plus journalists.

If the thing takes off, Forum’s wire could potentially eat into the Associated Press’s business and content from North Dakota and Minnesota, though Forum remains AP’s customer and story contributor. Potentially, readers of various Forum papers might see less AP content down the road. 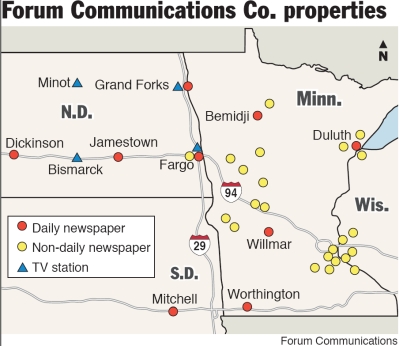 Asked if Forum plans to dump AP — perhaps at one or more of its papers — newly named wire service boss Mike Jacobs says, “I respect the question, but I’m not going to answer it. We are contractual members of the Associated Press. We do not see ourselves replacing the Associated Press.”

But in the same breath, he adds, “We have a product that is more complete, thicker on the ground, in the region we’re more interested in. We’re going to test it.”

AP has fairly onerous terms for exiting a contract — two years notice is common. Several papers, including the Star Tribune, gave notice at the start of the Newsprint Depression in 2008, as a way to save AP’s service fees, which can run seven figures for big operations. The wire subsequently cut many of its charges, and few outlets actually left. 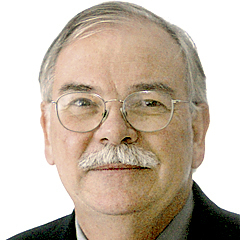 In Forum’s case, there’s no indication notice has been given. Minnesota/Wisconsin AP bureau chief Dave Pyle says, “We never comment on that sort of internal AP/member relationship.”

If the competitors stay partners, there’s a chance this could all be excellent news for readers. Jacobs says he has “a number of hiring decisions to make.” Out of the box, he needs a reporter for the Williston Basin oil patch, whose booming production has led some to dub North Dakota a “petrostate.”

Jacobs says oil patch coverage in an initial example of niche content Forum would market, both to its own papers and non-Forum news outlets. “I don’t rule out the possibility that there are political or commercial clients.”

The chance to augment revenues (or replace, in the case of sliding advertising markets) is a white whale many publishers have at least talked about chasing. The difficulty is that potential news-industry customers are also in a leaky financial boat, and newspapers – while doing excellent general-interest coverage – are not adept at providing high-level intelligence that business clients would pay hundreds or thousands for.

“We have serious expressions of interest,” Jacobs says. “I’m not in a position to tell you we’ve signed anything yet.”

Jacobs — who remains publisher of the Grand Forks Herald, though he relinquished the editing job for the new gig — insists Forum is not cannibalizing jobs at its 32 papers to staff the wire service. “I wouldn’t have accepted the job if that were the case,” he says.

However, Jacobs cautions, “You cannot poor-boy Forum Communications! [Grand Forks] had our best year ever; we restored some personnel and some news hole after the lean years of the late 2000s. We sent a reporter to Alaska” to cover North Dakota hockey.

“We’ll probably never get where we were in 1989, which was the peak of news hole and staff,” Jacobs allows. “But we’re generating revenues in ways we never dreamed of in 1989,” and the news service could prove another example of that.

Jacobs will also spend much of his time figuring out how to get Forum’s far-flung outlets knit together; nettlesome tech hurdles there. “We expect to be in business the end of the year,” he says.

Imagining other commonalities is now a key part of Jacobs’ portfolio: “Oil is obviously the easiest, but there are other ones we ought to be after.”