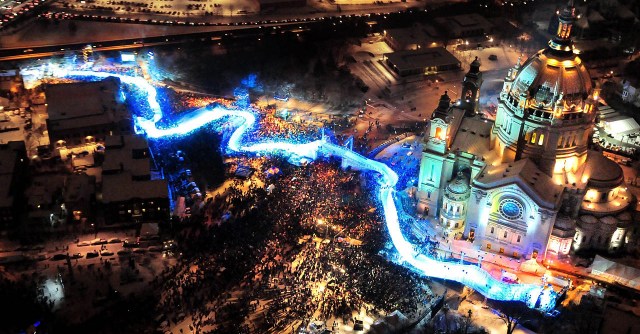 St. Paul has many attractive qualities, but it has rarely looks as sizzlingly hip as it did through Ben Garvin’s viewfinder, 900 feet above last weekend’s “Crashed Ice” event at Cathedral Hill.

The Pioneer Press photographer’s shot — an electric-blue snake with the Cathedral as its rattle — spread across Sunday’s front page, after electrifying the Twitterverse Saturday night. “The event was so done-up, you couldn’t take a bad picture,” says the overly modest Garvin. “Everything looks better from the air.”

Garvin originally planned to shoot from the sky on Friday, the first nighttime race on the schedule and the first time four skaters would attempt the course at one time. But he opted for shooting that night from the ground. “If we went up in the air, we’re not getting photos from ice level. I thought, what the hell, we’ll get the coolest, big-ass picture in the Sunday paper.”

Garvin says PiPress staff only goes up in a plane once or twice a year, but photo editor Jason Cook and editor Mike Burbach approved his idea. The cost was a modest $175 — the price to rent a high-winged Cessna at the Blaine airport for 45 minutes. “A pretty easy sell for the paper,” Garvin says.

“We had to fly low because of the smokestack of the District Energy power plant. The pilot mentioned a couple of times, ‘We’re too low, we might get in trouble.’ I was kind of saying ‘Do what you have to do, but keep doing it,’” the photographer says with a chuckle. “He said he hardly ever got to do cool things like this. He was banking sharp, and flying in high-traffic airspace, so it was technically challenging.”

Garvin brought a 400-millimeter zoom for his Nikon D300, but wound up needing only an 80-200-millimeter lens because of how close the pilot was able to get. “When I got off the plane, I had a laptop set up at the airport to edit and adjust the photo for size and sharpness for printing – no colors added!” he says.

But before the photo even hit the PiPress website, Garvin decided to tweet it. “Amazing aerial photo of #crashedice via @PioneerPress,” he wrote. “Will send link to full gallery soon.”

“I am just learning Twitter, a Twitter novice,” Garvin confesses. “You were the first person to retweet it, and pretty soon my phone was going ‘zizz-zizz, zizz-zizz.’ I think I got approximately 1 million Twitter followers. [Note: a very rough approximation.] It ultimately has little meaning, but it was fun to see the comments.”

Garvin says he wasn’t consciously channeling the paper’s new “Digital First” philosophy. Still, this was a perfect example of how it should work. Eighty-six people retweeted Garvin’s photo tweet to their social networks (and countless more retweeted their friends’ retweets). If they were anything like me, it made them more anxious to see the online gallery and, eventually, the front page.

“We’re making a push to get things out right away,” Garvin says. “I tweeted out a front-page PDF as soon as it was finished. … The aerial photo gallery (and helmet-cam videos) drew near-record numbers.”

Garvin acknowledges there was a debate within the newsroom about whether “Crashed Ice” was overcovered, especially since it was nominally a sport and mostly an advertising event.

“You’d be right to question the news value of the event in itself and our four days of front page displays. But ultimately the interest in the event drove our coverage,” he says. “People showed up by the thousands and our photo galleries and videos drove near record numbers online.”

After the photos ran, Garvin says he got an email from the Red Bull folks. “They said, ‘dude, you just crushed it.’ They speak their own language.”

For Garvin, the biggest kick came on the way back to Blaine. Jazzed by the ice-crashers, he asked if the pilot could do tricks like rolls and climbs/descents. “He pulled the stick back, and my kidneys stuck to the seat, and then he went down; my cameras nearly floated to the ceiling,” Garvin says with still-evident amazement. “It was scary, but thrilling.”

How I got that photo: Ben Garvin and the ‘Crashed Ice’ aerial