Naturally, this was all tweeted, retweeted and Facebooked, leading print-dependent organizations like the Washington Post to tub-thump “Social Media sets off firestorm of false reports.” Meanwhile, Star Tribune business editor Todd Stone tweeted, “Most newspapers have high standards for corroborating a story. Follow them and you will be a reliable and accurate journalist.” 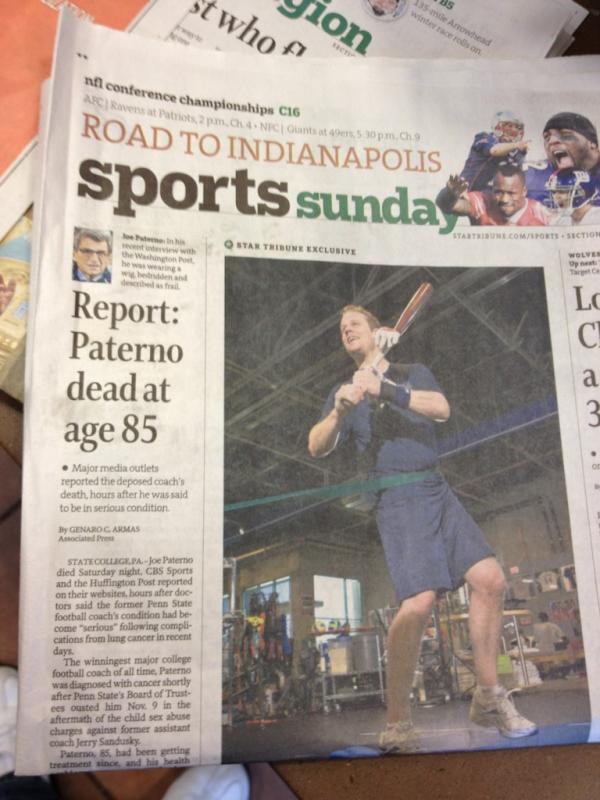 One problem: The Star Tribune not only published the erroneous reports on its website, but on the sports front of its Sunday state edition.

The print side wasn’t so lucky: “Report: Paterno dead at age 85” is there in perpetuity for anyone who bought a Sunday Strib a several dozen miles beyond the metro area.

The Washington Post would’ve been more accurate if it had said “Student journalist sets off firestorm of false reports — abetted by thieving online journalists without the decency to credit.” Stone’s tweet — which I generally agree with —would’ve been better if he’d added “but newspapers are not immune.”

So what happened at 425 Portland on Saturday night? According to knowledgeable Stribbers who asked not to be named because they lacked management clearance to be quoted, the Paterno “story” broke within 20 minutes of the Sunday state edition’s 8:10 p.m. deadline.

As you can imagine, 8:10 Saturday night is pretty early for the sports copy desk, which is constantly pushing to get up-to-the-minute results into a Sunday paper that is the week’s most widely read (and most profitable).

Copy editor Ken Chia saw the explosion of “Paterno dead” chatter, saw the seemingly credible CBS name attached to “Joe Paterno: 1926-2012” and for good measure, got the HuffPo report. With his boss’s sign-off — though with disagreement from at least one other copy editor — Chia decided to fold that info into an Associated Press report that Paterno was gravely ill.

Associated Press spokesman Paul Colford said the wire service never transmitted Paterno’s death announcement Saturday. “What we have seen is what somebody here politely refers to as ‘mash-ups’ of erroneous reports,” he says.

Chia left on the AP writer’s byline (Genaro C. Armas), normally a very stand-up thing, since everything else in the story came from the wire. And — in one of those nuanced newspapering conventions most readers don’t grasp — his headline included “Report:” to signal a lack of official confirmation.

In hindsight, of course, the Strib didn’t remotely need to push the envelope. Anyone who consistently reads the Sunday state edition knows they won’t get much happening after dessert. While I’m sure the Strib copy desk didn’t want a “Paterno ailing” headline to hit the news racks after Paterno died, there was no special urgency if this story was missed — by a day on the print side, or 15 minutes on the web side.

As MPR web editor Than Tibbetts put it on his personal blog “Joe Paterno is not a tornado.”

And yet it’s hard for me not to be understanding, no matter how stupid the mistake. The night before, the sports desk had labored mightily to get superb coverage of a thrilling Timberwolves-Clippers game into the paper, even though the West Coast game lasted well past midnight. As Stone’s tweet indicates, newspapers pride themselves on being a culture of verification, but they are also a culture of news, as in n-e-w.

In this case, a defender carried a terrorist’s bomb into the terminal. If nothing else, the Strib should clamp down on the “Reports:” gambit in favor of stronger attribution. The CBS and HuffPo story had vague or nonexistent sourcing that didn’t justify risking this sort of embarrassment.

By 8:20, the sports desk knew their story was in error; apparently “stop the presses!” was not an option. The later Strib edition featured a solid Philadelphia Inquirer story. By the wee hours, Chia, who has worked on the desk for a decade, had outed himself to Facebook pals and lamented equating CBS Sports with Walter Cronkite’s CBS.

Cronkite’s dead, and the Internet and social networking are here to stay. But in this contagion, journalists were the most powerful vector, and print provided less immunity that the tub-thumpers would have you believe.