Would you accept an ad from a religious sect touting a divine revelation given to a convicted sex abuser of two girls under 16?

That’s what the Star Tribune did Friday morning, running two ads from the Fundamentalist Church of Jesus Christ of Latter-Day Saints. One (on page A5 of my Minneapolis edition), simply says, “Jesus Christ, Son Ahman.” The second, on A6, proclaimes “Revelation of the Lord Jesus Christ Given to President Warren Jeffs,” and offers serveral writings for sale.

Jeffs, the president of the polygamist sect, was convicted in 2011 of molesting two “child brides” aged 12 and 15. He is serving life plus 20 years in a Texas prison. 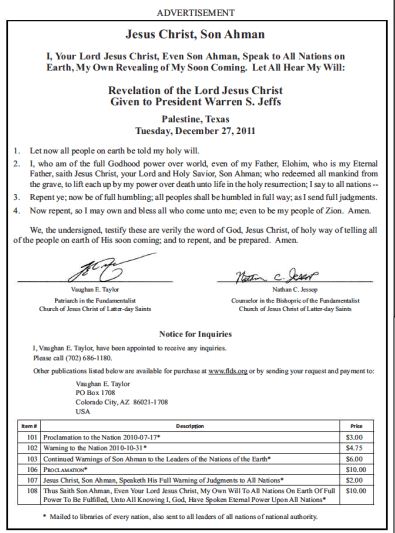 I sent an email Friday morning to publisher Mike Klingensmith and sales V.P. Jeff Griffing seeking an explanation. I’ll update this item as soon as I get one. [Update: a Strib spokesman is sticking with their policy, below, about not discussion advertiser relations publicly.]

The Strib has rejected religion-based advertising — just seven months ago, they blocked an ad other newspapers ran from the Presbyterian Lay Committee, which opposed gay ordinations in that denomination. At the time, a Strib spokesman refused to explain why, saying, “We consider the ad acceptance process a private business transaction between us and the advertiser — which we do not discuss publicly.”

In the past, I’ve criticized the paper for accepting ads from sketchy mass marketers and defended their rejecting ads from Tom Petters litigants.

In the former case, Griffing described the Strib’s process this way:

“We’ve got specific advertising policy guidelines [manuals] in the following categories: General, Automotive, Employment, Housing,” he explains. “There are trigger words and/or illustrations/photos in creative copy that get that ad hard-routed to our policy desk where a policy representative looks at every ad and checks against both our internal guidelines and law.

“In addition, categories like political and advocacy ads require additional forms to be filled out in advance, and those forms also go to our policy desk for deeper review.”

It will be interesting to hear how these new ones passed the smell test.