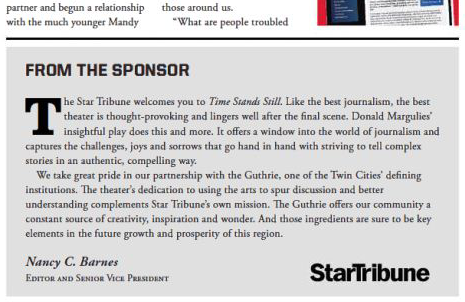 “Like the best journalism, the best theater is thought-provoking and lingers well after the final scene. Donald Margulies’ insightful play does this and more. … The Guthrie offers our community a constant source of creativity, inspiration and wonder. And those ingredients are sure to be key elements in the future growth and prosperity of this region.”

The author of this breathy Star Tribune review? Not theater critic Graydon Royce, but the paper’s editor, Nancy Barnes.

[Update: Though she did not respond to emails sent Friday or Monday, Barnes said after this was published: “I did not see that ad in advance, nor did I know my name was going to be on it. That won’t happen again. The news department clearly needs to stand apart from the organizations and institutions it covers.”]

Barnes’ byline extolling a local institution her newsroom covers was odd enough, but so was the entire one-and-a-half-page wrap-around, known as a “spadea.” It was not marked as advertising, but Barnes’ “From the Sponsor” piece sat below one praising Marguilies’ “Time Stands Still” — a play about an idealistic journalist — as “a gripping, of-the-moment look at relationships in extraordinary times.” The author? The Guthrie’s director of communications, Quinton Skinner — whose “review” of the play appeared in the Strib three days before Royce’s own.

Barnes — who had to defend her journalists against accusations that the Strib’s Vikings stadium coverage is biased because of Strib holdings near the Metrodome — wrote last year: “The role of the newsroom isn’t to lobby … even if that could financially benefit the company.” While there aren’t millions of dollars in potential land sale proceeds at stake here, the Guthrie is an advertiser and Star Tribune board chair Michael Sweeney is a member of the Guthrie Board of directors.

He adds: “The piece was entirely an advertising piece and an unfortunate error in ad operations resulted in the ‘advertising’ slug being missing from every page. As for the Nancy Barnes statement, the sponsorship on this play with the Guthrie is a business side sponsorship and that statement  which was crafted by us — should have appeared over a business-side signature.”

The apology is welcome, but even if the advertising slug was present and Barnes’ name missing, the Strib still played it too cute here.  The section was labeled “twin cities” — too close to the “twin cities + metro” news section head and in the same font. (The story font was different.) And while Skinner was identified as “Director of Communications,” he wasn’t identified as the Guthrie’s communications director. Royce — who was not aware of the spadea before seeing it at his Friday breakfast table — notes Skinner had been a Star Tribune freelancer before taking the Guthrie job in 2011.

“Readers should definitely care about this,” Royce says. “It was laid out in a way that mimicked newspaper design; the newsroom gets calls about people who ask us about the Amish fireplace. I only know this second-hand, but I heard we got a call from someone saying they enjoyed the ‘review’ in the paper, but it didn’t have the usual dates and times and ticket prices. It really, really creates an ambiguity that even the most sophisticated reader would have difficulty telling it” from regular coverage … as a journalist, I’m concerned about confusing readers.” 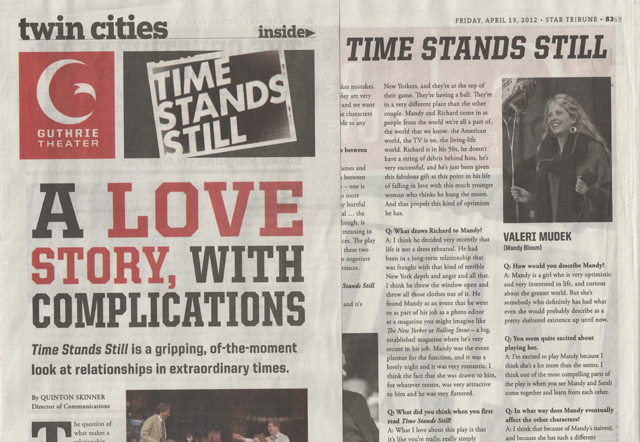 How the Star Tribune’s Guthrie spread appeared to readers.

The bigger question may be why Barnes lent her name to any ad section, much less one that, in effect, scooped her reviewer by three days. [Again, see update above.] The spadea ran Friday, the same day the play premiered; because the theater does not let reviewers review previews, Royce’s judgment  waited until Monday.

“I really did” like the play, says Royce, adding that no higher-up interfered with his coverage. “But all day long on Friday, I was perturbed, wondering what kind of a box did this put me in, how this screws me up. All day Friday, I’m in this hothouse of journalism ethics. But by the end of the first act, I said to myself, ‘Big deal, I’m here, seeing the show, I know how to answer the question of whether I like it or not.’”

Only a naïf would believe editors aren’t concerned with revenue; I recently had to take grief from a Strib editor about MinnRoast, where the people we cover help raise money for MinnPost’s operations — including Sweeney and Klingensmith, who have donated since they arrived at the Strib. I don’t attend the event, but I do take the paychecks. I also said “yes” a couple of weeks ago when Sweeney asked me to appear on a panel (gratis) following the May 7 production of “Time Stands Still.”

Our editors say what Klingensmith did when asked about the spadea: “The news team’s view of the play and the institution is unrelated to any business relationship we may have, as is the case with any advertiser or business partner.”

I wouldn’t blame readers for being less sure in either of our cases.