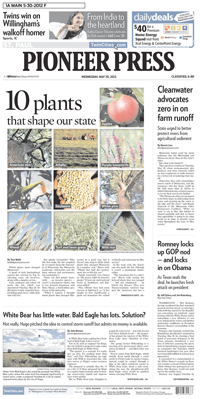 Pioneer Press Newspaper Guild co-chair Gayle Grundtner confirms the paper is offering buyouts across all departments. Guild spokesman Dave Orrick says of management, “We don’t know what goal or or target they have in mind. They said it was a combination of years of service, skills and what makes sense for the company.”

The move comes in the wake of a new union contract — signed last week — that allows layoffs and expands freelancing (though not in core east-metro counties). Editor Mike Burbach and manager Chris Clonts did not respond to requests for comment.

Since last year, the Pioneer Press has been managed by an entity called Digital First Media, which is all about speeding up the change from print to digital. (To wit: the Mobile Engagement Unit.)

According to Orrick, “management said that the buyouts in no way signify an end to any future hiring” or putting in new resources. This fits the restructuring model, though those rarely produce increased headcounts. Because the contract preserved seniority rights, buyouts are the only way to forestall layoffs of recent and perhaps more digitally savvy hires.

Management — which announced rare weekday print circulation declines last month and like most papers has suffered an advertising drop — can refuse to buy out veterans it doesn’t want to lose. Bought-out workers would get two weeks pay for every year of service, as per the contract.

The buyout request comes at a time when Star Tribune newsroom staffing has held steady, so it only widens the staffing gap between the two papers. Digital First believers insist they can be smarter about news creation and harnessing the power of “the people formerly known as the audience.”

Still, Orrick notes, “The Guild and its members for years have made sacrifices with the primary goal to keep bodies at the paper because we need bodies to do the job.”