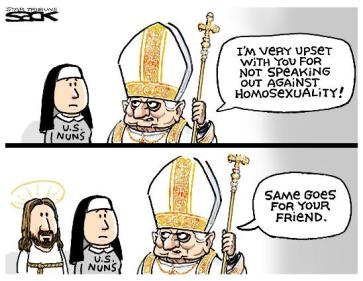 Star Tribune editorial page editor Scott Gillespie has seemed to float serenely over months of catcalls about relentless Vikings stadium cheerleading, but he is still livid nearly a week after MPR reported the Strib rejected a priestly letter attacking the Archdiocese of St. Paul and Minneapolis’ support of Minnesota’s proposed anti-gay-marriage amendment.

“The MPR story was poorly done,” Gillespie charges. “The only thing that made this letter stand out was the story by MPR that made it seem as if we were hiding the fact that 80 Catholic priests were going public with their opposition to the amendment. That’s a gross mischaracterization and it leaves the ridiculous impression that we would suppress a commentary or letter simply because the Catholic Church might be offended.”

‘It did not say anything unique’

To those of us who oppose the amendment, the letter seems spectacular: Three priests concluding, “We write now to say there is not just one way for Catholics to vote in November.”

To Gillespie, “It did not say anything unique.”

He notes the Strib has printed at least three recent anti-amendment pieces from clergy, including a December one from local Catholic priest Michael Tegeder. Overall, Gillespie says the Strib has published 15 commentaries and 35 letters packages on the issue “and they have been lopsidedly against the proposed change.”

Pointing to a three-week-old Steve Sack cartoon (above), Gillespie adds, “Anyone who would suggest we have some sort of ban on criticism of the Catholic Church simply does not read our opinion pages or website. … in case there is any confusion, our Editorial Board is opposed to the amendment.”

Aslanian’s piece made no judgment about the Strib’s overall coverage. It included Tice’s explanations that similar pieces had run, and paraphrased his view that “the bar is high for delivering something new.”

Aslanian says the two stories were woven because a spokesman for the 80 ex-priests got back to her the same day the retired priests received Tice’s rejection.

Gillespie says even that statement is not quite accurate; the letter was forwarded from a parishioner via business columnist Neal St. Anthony. The Strib isn’t above printing such sideways submissions, he says, but made it less clear that getting it into the paper was the primary goal.

Power, who wrote the letter, says the parishioner “mentioned she knew Neal, so the way to do it was send it to him and [have him] deliver it to editorial. I can understand the protocols, but we played the influence game. In hindsight, that was maybe not the best way to do it, but that’s what we chose.”

(Power says he and his co-signers have received no sanctions from the church since Aslanian’s piece ran May 17. “At this point, nothing beyond their initial response” to MPR.)

Tice is a conservative, but when I worked for him at the Twin Cities Reader 20 years ago, he was also fairly libertarian. (I remember him taking a live-and-let-gamble approach during the state lottery amendment campaign.) The Strib’s opposition to the marriage amendment — “we will weigh in again and again before Election Day,” Gillespie states — also argues against a church-coddling agenda.

Still, I think the paper made the wrong call. Gillespie cites Fr. Tegeder’s December letter but acknowledges him as a usual suspect whose church dissents have appeared in the Strib since at least 2006.

Says Power of Tegeder, “We know him, but we would be seen as more moderate” — a key reason they wrote the letter without him even while claiming “there are many other priests who support this position.”

It may be a bit much to expect the lay journalist to fully grasp intra-Church politics. Still, Tegder’s letter appeared five long months ago, and the three priests’ letter confronted the issue much more directly. Aslanian rightly recognized the news value.

For his part, Power says it’s all worked out for the best. “In some ways, my feeling is, the MPR story put it in better context than a letter out of nowhere in the Star Tribune. It got on social media, social networks … I’m getting calls from Chicago saying ‘Is that you who wrote it?’ I count it as a lucky turn of events.”