Earlier this week, First Congressional District Republican candidate Mike Parry made a big issue of primary opponent Allen Quist’s political misstatements, including a 1994 quote where Quist said men had a “genetic predisposition” to lead the family. According to New Ulm Journal reporter Josh Moniz, “When Quist was questioned about it at a July 12, 2012, town hall in Rochester, he responded that people were making things up.” 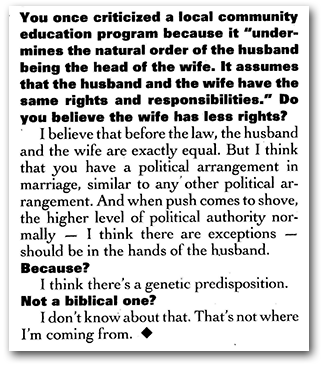 I was the Twin Cities Reader reporter who got the original quote, at a Country Kitchen outside Quist’s home town of St. Peter. [Read the entire interview as a PDF 2.6MB] The quote went as viral as anything could in 1994; the Star Tribune picked it up, and staffers in Gov. Arne Carlson’s campaign — giddy that they could sabotage their opponent with half the voting population — held a news conference where they handed out buttons with a red circle and slash through the words “genetically predisposed.��

Oh, by the way: I literally still have the tape.

For first time in the history of the Internet, you can listen to the full exchange at the bottom of this post. There’s a good story about why I still have it, but we’ll get to that.

On KTLK-FM’s “Late Debate” show Sunday, Quist said of the genetic predisposition quote, “What I was being asked about there — totally out-of-context — is historically what’s the position been of the Christian church.”

He was talking about a Strib interview four months after mine, but he originally uttered it because he was specifically trying to avoid a biblical/religious claim.

A little background: Quist had criticized a local community college family education class for undermining “the natural order of the husband being the head of the wife.” My question is garbled at beginning (see the Reader excerpt, above right), but after I asked what the basis of the natural order was, he said, “I think there’s a genetic predisposition.”

Quist: “I don’t know about that. That’s not where I’m coming from.”

In 1994, the religious right was still a young force in Republican politics, and the Quist campaign was battling the notion that (as I put it so piquantly then) “supporters [were] little more than Jesus-loving zombies.”

I’ve always thought Quist — who is not a dumb guy — outfoxed himself by trying to come up with a scientific rather than religious justification. Now it turns out he was talking about religion all along!

In a weird way, I foresaw these shenanigans 18 years ago. Shortly after the post-story firestorm erupted, a Republican operative (I can’t remember who, or for what side) called me up and said the Quist forces were pondering a news conference attacking the interview’s veracity. I replied, “Good. Tell them I have the tape. I’ll get another story out of it.” 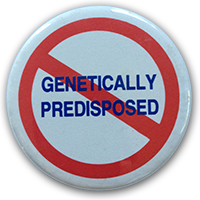 There was no news conference. Still, I figured this was serious enough business that I gave the microcassette to my then-girlfriend, who put it in her jewelry box for safekeeping. Eighteen years later, my wife still had it there.

There was a bit of a scramble to find a microcassette player – thank you, Secret Stash Records! – but via digital technology few foresaw then, the historical record is available for you to peruse.

Quist has complained that the quotes are distracting from the fundamental issues of the day, and I have some sympathy, actually. But a sure way to keep the distraction tormenting is to misrepresent it. Free advice, Mr. Quist: Stop doing that.