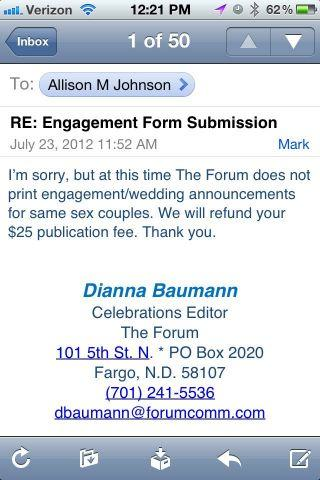 The Fargo Forum — flagship paper of a chain that owns several Minnesota papers — is under fire for rejecting a same-sex couple’s announcement of their legal marriage in New York.

The blowback, which includes subscription cancellation threats and an online petition that gained 1,300 names in under a day, prompted editor Matt Von Pinnon to announce a policy review via Facebook late Monday night, followed by a Tuesday story.

Allison Johnson, who plans to marry Kelsey Smith in Aug. 1, said the couple placed the ad on Saturday and received a Monday morning rejection from “Celebrations” editor Dianna Baumann.

How did the 31-year-old business consultant and her 27-year-old fiancee get the idea to announce the old-fashioned dead-tree way?

Explains Johnson, “We were actually packing because we’re buying a house. We were using the Fargo Forum and a page we picked up to wrap a vase was of wedding announcements. The community completely supports us, we wanted to share what was happening to us. We thought the [Celebrations] section was really well done; young couples, old couples — it was sweet, and we really wanted to be a part of that.”

Johnson posted the Forum’s rejection on her Facebook page Monday morning, and a friend, Gia Rassier, broadcast it via her Twitter account a couple of hours later. As of 9:40 a.m. Tueday, the tweet has received 114 retweets, earning coverage on local radio and TV stations and online sites such as MSNBC.

Over the years, Forum ownership has been quite conservative, endorsing far more Republicans than Democrats. North Dakota is conservative, too; unlike Minnesota (for now), North Dakota has an anti-gay-marriage amendment, passed in 2004.

However, at the time, the Fargo Forum editorialized against writing marriage discrimination into the state Constitution:

“Amending North Dakota’s Constitution to deny or threaten to deny rights to North Dakota citizens contradicts the document’s historic purpose,” the editorial declared. “Never — never — in the state’s history have the people of North Dakota condoned misuse of the constitution by a special interest group to erode citizens’ rights. And never has the state’s basic civil, secular document been perverted to impose one group’s religious beliefs on the citizenry.”

Forum has since purchased the Duluth News-Tribune, but does not ostracize same-sex couples there. A newsroom worker says of gay marriage annoucements, “We do take them.”

Other major Minnesota papers, including the Minneapolis Star Tribune, St. Paul Pioneer Press and Mankato Free Press, also accept same-sex marriage announcements or have no policy against taking them. “We don’t care,” says Free Press managing editor Joe Spear, who added, “I can’t think of the last time the situation came up.”

Johnson says coverage from competing Fargo media has been favorable — local station Y94 even placed the marriage announcement on their website. Ultimately, she says, “This is really just a matter of wanting to express love in way so many other people take for granted. It should be allowed and available, to anyone in love who wants to share their love.”