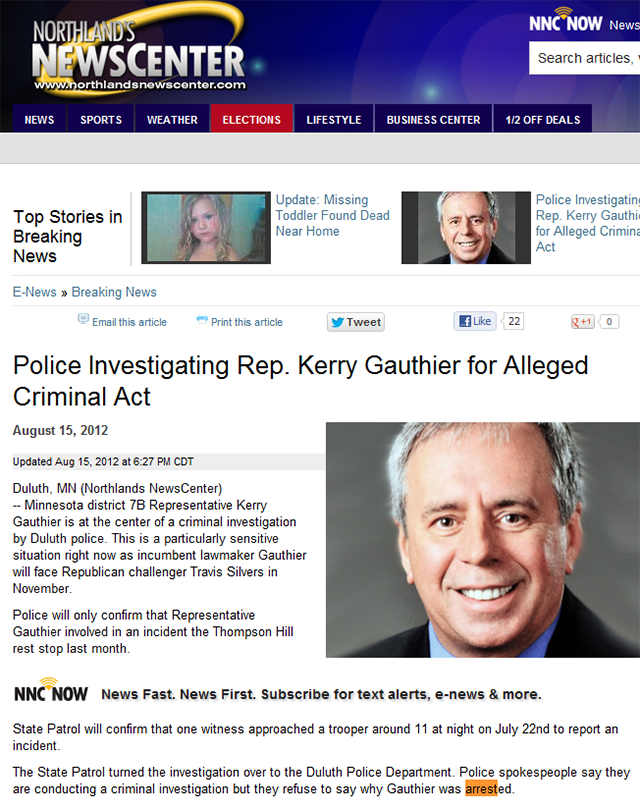 An excerpt of a Northlands NewsCenter story that incorrectly reported State Rep. Kerry Gauthier had been arrested.

So would you have done what Barbara Reyelts did? Would you have used anonymous sources to publish salacious allegations about a state representative when competitors waited for something more solid?

Reyelts, news director of Northlands NewsCenter, a Duluth TV station consortium, allowed “well-placed sources” Wednesday to allege DFL State Rep. Kerry Gauthier had sex with a 17-year-old boy he met through Craigslist near a highway rest stop. The Northlands story, noting police “refuse to say why Gauthier was arrested,” ended with this: “police are investigating the potential that money changed hands which could make it a criminal matter.”

Competitors, including the Duluth News Tribune, waited to report the details until the St. Louis County Attorney declined to prosecute, which triggered a document release. According to police, Gauthier told them he did have oral sex with a 17-year-old on a hill above a Highway 35 rest stop, and did meet the boy via Craigslist. According to the paper, Gauthier and the boy said the sex was consensual and no money changed hands.

So Northlands got it right and ahead of the competition, right? Journalists at the News Tribune and WCCO-TV clearly decided anonymity was not good enough Wednesday, while City Pages gleefully and unquestioningly reblogged the Northlands report Thursday morning.

Luckily, City Pages focused on the sex and not the “arrest,” the one unambiguous factual error in Northlands’ reporting. (See page excerpt above.) Reyelts confirms her operation got it wrong on the Wednesday 5 p.m. broadcast.

After police complained, the “arrest” was excised from scripts for the 5:30 p.m., 6 p.m., 9 p.m. and 10 p.m. broadcasts. However, there was no on-air correction — typical for TV — and a web “update” still listed the “arrest” until I called the station at 11 a.m. Thursday. There’s no correction on the web story, either.

Reyelts blames police for being “nebulous” in answering Northlands reporters’ questions about a possible arrest after the story broke Wednesday. The News Tribune also complained that police have not been not fully forthcoming, but did not use lack of clarity to put an incorrect conclusion on the record, much less keep it there for another 18 hours.

Only tabloid lovers would defend the station’s decision to include the prostitution bit, though readers might naturally ask the question given the other details. Standards on reporting crimes differ — the Pioneer Press reports arrestees’ names, while the Star Tribune often won’t until there are charges — but most editors in my experience would insist on at least one shred of evidence to put the prostitution allegation into the public domain. A tip-off to Northlands’ shadiness can be found in the weaselly construction that police were “investigating the potential.”

Given that the anonymous sources got several things right, Reyelts is probably feeling more confident about the answer she gave me before the latest News Tribune story broke. Asked whether it was appropriate to use anonymous sourcing for such serious allegations, she replied, “It’s a very serious case, but we have a very serious source in a position to know. I think the public has the right to know as much as possible as to a public official’s conduct.”