A year ago, I did a story on “Why the Current’s ratings are soaring.” Since then, the number has been cut in half.  MPR News’ share of Twin Cities listeners is off 30 percent — a record low for the 39-month portable people meter (PPM) era.

As of July, The Current claims 2 percent of total Twin Cities radio listeners, down from the low 4s a year ago. MPR News is at 3.9 percent, after posting 5s or better most of the past three years.

What’s up? An MPR spokeswoman did not return an email for comment. As a data geek, I have to acknowledge measurement weirdness as a possibility. During the boom times, commercial competitors groused that MPR had a favorable “panel” — a mere handful of public-radio addicts among the 1,300-or-so meter-carriers providing a sharp boost in “time spent listening” (TSL), one of the two ratings components along with audience size. The worm can turn when panelists leave.

Another factor: ratings, which were quarterly when people filled out paper diaries, are now monthly. That increases variability, which is why the charts below show 13-month trends. And in MPR’s case, that trend is firm: 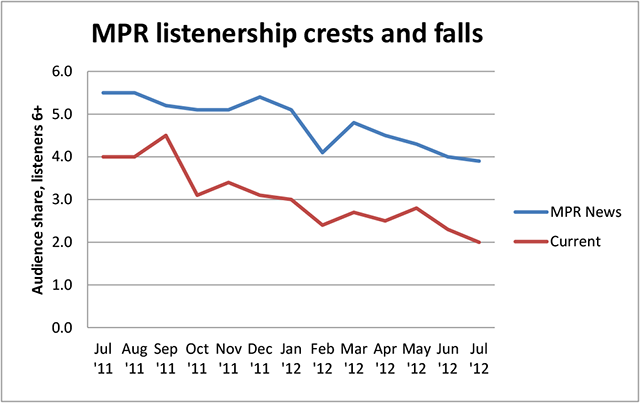 You might wonder if Gary Eichten’s retirement played a part in the news-side decline. I looked at the ratings of “Daily Circuit,” which swallowed Eichten’s 11 a.m.-noon hour in February. The March and April 2012 ratings were up over 2011, May was flat, and June and July ran substantially behind. Only in the last two months has “Circuit’s” decline matched the station’s, so I think whatever’s happening is bigger than one show.

It should also be said that ratings aren’t as big a deal at non-commercial stations. Member-supported stations don’t depend as much on ads, though bad numbers can hurt sponsorship income. Ratings don’t measure reporting quality, at least not directly. And with the exception of very minimal local live-stream listenership, they also don’t account for digital transition: an Arbitron meterer who reads a web version of a radio story wouldn’t count in the audience.

While MPR News contends with a (possibly panel-inspired) drop, something magical has happened at WCCO-AM. In the mornings, Dave Lee’s crew is now third among men 25-54 … an age group younger than the Good Neighbor’s traditional 35-64 target. (You can read more on what women and everyone 55+ listens to here.)

Put another way: a year ago, KFAN’s Power Trip beat Lee by a share point among this group; now Lee beats Mike Morris’s crew by two. The entire daylight lineup of John Hines, Chad Hartman and John Williams is up.

One sign this is panel-induced: WCCO’s TSL has almost doubled. But maybe the Good Neighbor has built a better line-up now that Michele Tafoya is gone and they’ve moved their other hosts around.

Almost as dramatic is what’s happened to 1500ESPN, now slogging through its second year as the flagship of the desultory Minnesota Twins, and its first with rival KFAN on the more powerful FM band.

From 9 a.m. to noon, fewer guys listened to Judd Zulgad and Joe Anderson in July than lefty station AM950. That’s nothing compared with the bludgeoning Pat Reusse and Phil Mackey suffered. The noon show’s July-to-July share among men 25-54 fell by two thirds, sliding from 6th to 15th place. Joe Soucheray fell from 11th in the demo to 13th, with roughly a third of his male demo leaving.

July was an exceptionally bad month. For example, “Judd and Phunn’s” share was almost triple in June, and Reusse’s and Mackey’s was twice as high in May. It’s tempting to suspect panel in the first case, though lead-in “Mike and Mike” doesn’t show slippage. For the latter, you’d think Twins day games, but the team also stunk last year.

While KSTP has to hope it was a bad panel or bad few weeks, KFAN’s shows held their own. Power Trip, Common Man and Dan Barreiro were all up — Barreiro holding onto No. 1 among men 25-54 — and Paul Allen was stable.

Vikings season is just around the corner, and even a terrible NFL team gives KFAN a lift, as last year’s data shows: 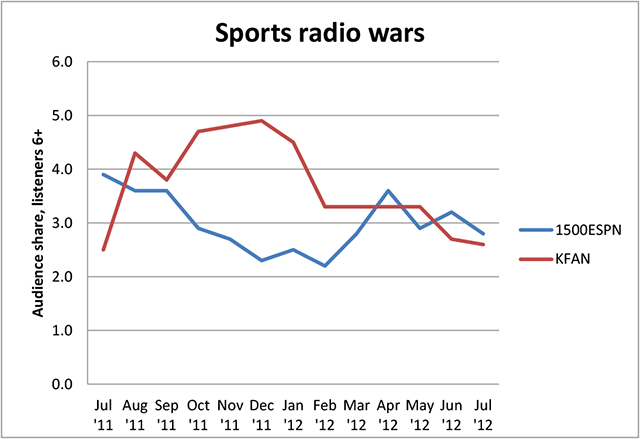 At the top of the charts, the post-Christmas arrival of country Buz’n 102.9 knocked late-2011 ratings champ K102 as low as No. 4. The incumbent country station always does worse in the winter but regained the top spot in July with an 8.6 share.

Country stations aim at women 25-54, and K102 is off about 3 share points from July 2011 while Buz’n is flat from its WLTE days. Nearly twice as many men are listening to Buz’n as a year ago, but they are like drones to the queen bee; CBS programmers had to be hoping for better among women. 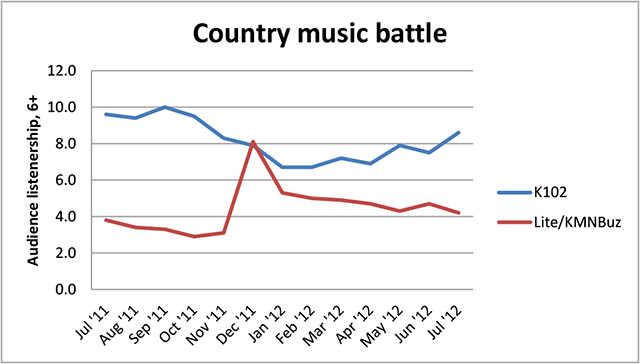 The country competitors might be held down by the past year’s enduring story : the absolute dominance of pop music, which has lifted KS95 and KDWB. The duo have been one-two among people 25-54 all year.

KS is now third among men 25-54, after leading them in May and June — that’s stunning for a female-skewing station. KD is up from 11th to 5th in a year among the younger guys.

Elsewhere, two Clear Channel stations, KOOL108 (5.9) and Cities97 (5.1) are at long-term highs — Cities suffered when the Current soared. KOOL has modernized its oldies (aka “greatest hits”) and Cities has incorporated older songs in its more mainstream definition of “new and/or local” artists.

Even KQRS — the PPM-era decline’s poster child which just re-signed Tom Barnard — has shown growth of late. The station regained the top spot among men 25-54 after falling behind KS95 and 93X in June, and is slightly above a year ago.

The biggest loser remains KTWN, the former B96, which fired morning guy Tony Fly a few weeks ago. The music station’s share hit a new low  (1.4) after years in the 3s and 4s — and the 25-54 demo isn’t much better. Other programmers seems convinced it’s only a matter of time before the Pohlad-owned FM gets Twins rights; 1500’s contract expires this season, perhaps none too soon. 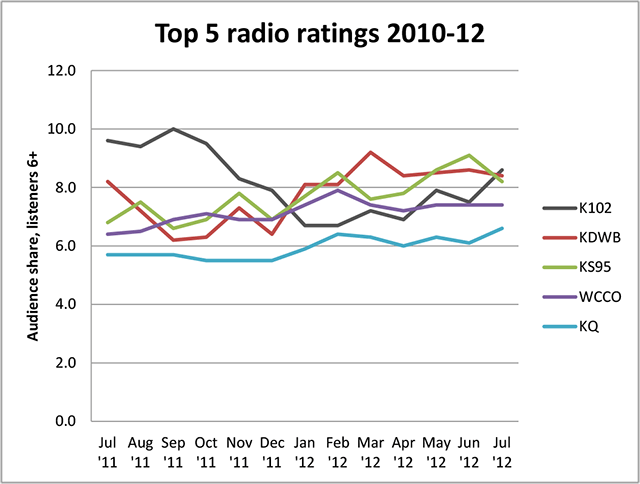 With WCCO up and MPR News down, what of the former KTalk, the right-wing bomb-throwers exiled to the AM band in the KFAN switch? Topline at Twin Cities NewsTalk shows definite erosion, from a 4 share to 2.5. The Davis and Emmer morning show — a ratings rocket a year ago  —  has lost about a tenth of its share juice among men 25-54; the rest of the daytime lineup is down a third to a half. 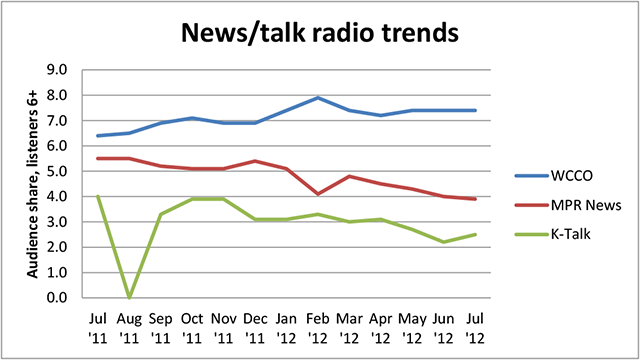