To me, Village Voice Media’s decision to keep Backpage.com and sell its 13 alt-weeklies resembles nothing so much as Britain’s hacking scandal. Both were born of illegality: phone hacking, in Rupert Murdoch’s case; classifieds insufficiently scrubbed of kiddie prostitution, in VVM’s.

In both cases, public censure provided cover for resistant owners to segregate legacy print; for Murdoch, cleaving Fox News and movie studios from earnings-depressed newspapers; for VVM’s Jim Larkin and Mike Lacey, Backpage from weeklies such as our own City Pages.

Monday, the VVM empire — now Voice Media Group — echoed no one so much as Kevin Bacon in “Animal House”: “Remain calm, all is well!” New co-owner Scott Tobias – described by one ex-CPer as “Glengarry Glen Ross’s Alec Baldwin if he were a short, balding man” – told numerous media outlets there would be no operational changes. For his part, Lacey asserted that all the papers and sites bequeathed to VMG were profitable.

As locals know, that profitability has been maintained with deep cuts; in just the past year, the full-time news feature writing staff has been cut from four to two; while no paper that employs Andy Mannix can be called journalistically irrelevant, his newest colleague, for now, works the cat-videos-and-unicorn poop beat.

Arts does not equal piffle (one cover featured Brother Ali, who sits just below Dessa in CP’s pantheon), and covers do sell papers. Well, not sell exactly, though there is a freebie competition with Vita.mn, the Star Tribune’s entertainment-only weekly.

CP still dominates the revenue fight, and it’s surely coincidental that the Strib features desk has gone the hardest after CP’s Backpage involvement. However, newspaper sources say Vita.mn is finally profitable and internal musings about shutting it down are in the past. While both papers got a break when the Onion stopped printing, objects in City Pages’ rear view may be closer than they appear. 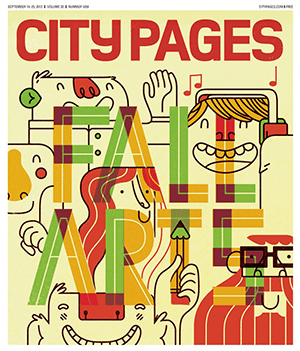 As with more musician covers, fewer print copies isn’t necessarily a bad thing — publishers have been known to “paper the house” to impress advertisers, even as stacks of ignored pulp rose on the racks. But these days, margins are skinny enough and newsprint costly enough (City Pages shrunk page sizes in 2010) that such games are tougher to play.

Here, too, some of the public data is discouraging. According to Quantcast, which directly measures CP web traffic, people, visits and page views are (holiday spike aside) flat or trending down.

Quantcast isn’t perfect – sometimes, web admins don’t give the site access to everything – and doesn’t capture apps, a few of which CP has deployed.

But while Tobias touts the potency of “hyper-local” advertising, “hyper-local digital” isn’t necessarily an alt-weekly’s to own. For example, consider the new iOS Maps. Yes, they’re currently horrid — but more importantly for this conversation, Apple partnered with Yelp!, whose reviews appear in a given location’s info box. (Google does the same thing with Google+).

Yes, City Pages can be more locally granular, but that advantage will ebb. CP and fellow alt-weeklies are not more social — national/global apps have the network-effect advantage there — and not more convenient (see Apple-Yelp!).

Which brings us back to Backpage.com, Village Voice Media’s most powerful nationwide digital product, the one shining example of turning a web legacy into digital dominance (albeit because original innovator Craigslist got cold feet about hot adolescents).

If Lacey is to be believed, Backpage and Voice Media will be completely separate, with no business relationship. No one is saying how much Backpage floated City Pages’ boat — I couldn’t find out yesterday whether Backpage profits were husbanded mostly at the corporate level, or credited toward individual alt-weekly budgets, though Tobias told the Wall Street Journal each received only a “small license fee.”

There’s reason to doubt that — Larkin and Lacey fought hard to keep classifieds and alt-weeklies together, though maybe, like Murdoch, they loved the journalism beyond its particular profit margin.

But at a time when staffing is corkscrewing into the ground, any bit of lost revenue hurts that much more. This was truly a defensive move – VVM faced even higher losses from existing advertisers bolting. Unlike Murdoch, the new owners don’t get to comfort themselves by hanging on to a powerful, if less noble, digital asset. Voice Media Group lost a distraction, but they honestly can’t lose a lot more.

What the Backpage.com sale means for City Pages