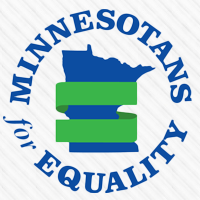 The ad buy — under $100,000 for the one-minute spot, says Minnesotans for Equality founder Tracy Call — will run on KQRS, 93X and KFAN, whose listeners provided hundreds of thousands of votes for Ventura’s 1998 gubernatorial victory. (To hear it, click the logo above.)

While Kluwe actually says “lustful cockmonster” in the ad, listeners will instead hear “lustful [bleep]monster.”  The ad features the whip-smart punter being grilled by dullard forces of marital conformity — “We’re from the government, we’ll ask the questions” — and expressing shock that these Big Brothers can block equality constitutionally.

Hillsman says the Kluwe spots are aimed precisely at Ventura voters: “I think there’s a shared commonality when talking about great intrusions on freedom.”

Minnesotans United, the much larger anti-amendment coalition, has run heartfelt, uplifting ads and, at least initially, shied away from Kluwe’s bluntness. Hillsman — never shy with an opinion, and never a fan of the state’s DFL establishment — dismissed Minnesotans United’s ads as “eyewash” and says they are not moving independent swing voters.

“If you look at any of the polling data, they’ve done a particularly lousy job,” Hillsman says. “If you look at the Star Tribune poll — 1,000 person sample size, pretty good — they’re doing lousy among Republicans [78-22 percent Vote Yes] and losing badly among independents [58-33]. Somebody needs a campaign other than Minnesotans United, or this thing isn’t going to get there.”

Having known Hillsman for years, he’ll bring a bunker-busting atomic bomb to a knife fight, but Call says there’s zero animus toward Minnesotans United: “We’re truly not trying to step on anyone’s toes. We want to defeat this amendment.”

Noting “I’m a lesbian, I have a child and I’d like to be married some day,” Call acknowledges that “the message Minnesotans United puts out appeals more to me personally, but I’m the base. That’s why we’re working with Bill, to get at Republicans, libertarians and independents. Our campaign is designed to be complementary, to fill the gaps so everyone is being talked to.”

In my opinion, both campaigns have identified the same swing voters and both are using the “don’t limit freedom” argument. (Look at any orange “Vote No” lawn sign.) Minnesotans United’s genteel appeal hits at the moderate part of the spectrum that might not go in for the cock talk, and Minnesotans for Equality’s hit at the libertarian part that equate politicians with male sexual organs.

Call hopes the “breakthrough creative” campaign spurs not only votes but donations for another radio and possible TV spot. (See conflict of interest disclaimer, below.)

“I’ve been doing media buying for a decade, always behind the scenes,” she says, adding that she’s used her knowledge of ad inventory and rate structures to make the ad as widely heard as a now-puny budget allows.

Hillsman — whose campaign for 2008 U.S. Senate independent Dean Barkley was one of his few Minnesota races since Ventura — says Kluwe took less than an hour to voice his part, ad-libbing along the way. “You do these things with candidates and celebrities, and most of the time, it takes a long time. Kluwe is a different breed of cat — very smart, very funny and a natural in front of people.”

Conflict of interest note: I’m a donor to Minnesotans United, which played no role in the genesis or reporting of this story.