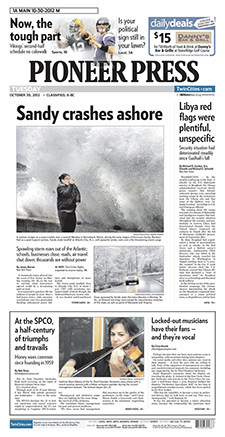 Still, the state of the industry is such that both “wins” came with caveats.

The PiPress weekday gains were only due to free digital and mobile apps; paid print and e-edition replicas were down a combined 2.2 percent. However, the PiPress focuses its efforts on Wednesday-Friday, where paid circulation rose 3.7 percent.

As for the Strib, Sunday print actually declined 14,700 copies, to 476,573 — indicating other U.S. papers are falling even faster. Strib officials note they instituted a price hike in April.

On the web side, the PiPress posted monster gains in its first year under Digital First management: unique monthly web cookies (bits of web code tracking individual browser/device usage) were up 30.6 percent over a year ago, to 2.4 million. The Strib, which instituted a pay wall after the 2011 report, was down 2.1 percent; still an impressive 7.5 million. 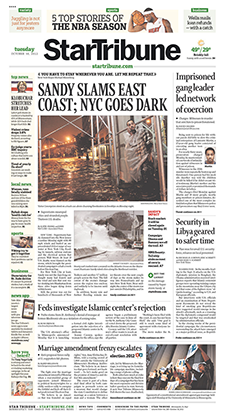 However, the story flips when you get to the local level.

The reports include a “market penetration” stat that mass advertisers crave. There are two measures: one the newspaper focuses on (NDM) and a 66-county standardized market, known as DMA.

Online measures individuals who looked at the online site in a 30-day period. Here, the Pioneer Press fell 20 percent in its 7-county east-metro NDM and the 66-county DMA.

The Strib lost a bare 0.4 percent in its 13-county metro-wide NDM, and 6 percent in the larger DMA. Strib officials suggest looking at 7-day web use, to measure “engaged” users. There, they say traffic is up. (The stat is not available on the newest reports.)

Surprisingly, print — where the Strib was down overall — boosted overall local penetration. The Strib’s local share rose 4 percent in their chosen market and 6.5 percent in the 66-county area if you mix in print readers who saw a paper in a given week. This indicates the Strib lost print readers mostly outside local markets.

Meanwhile, PiPress penetration fell 3.7 percent in its market and 1.6 percent in the 66-county area. Both media organizations now hit roughly 54 percent of households in their targeted markets.