Out of nowhere — except for Our Vote, Our Future news releases — the Voter I.D. amendment has become a nail-biter. Up by double-digits as recently as Oct. 28, mandatory photo I.D. trails or is tied below 50-percent passage, according to SurveyUSA and Public Policy Polling final November surveys.

Thus, we lead our final edition of “Crosstabs!” with “Photo I.D. – What the Hell Happened?” (I’ll get to the presidential race and marriage amendment in a bit.)

Republicans generally like SUSA and Dems PPP, but both have been accurate in recent Minnesota elections. The chart below shows the Photo I.D. plunge — up 12-15 points as late as last week, now tied (SUSA) or actually behind 5 (PPP).

The simplest story — if you hate the I.D. concept — is that women are higher and nobler beings. After supporting Photo I.D. in September and October, they oppose it now by double digits. End of story, more or less, though women peeling away reduces Photo I.D. support in nearly all subgroups. (I don’t list age for PPP because they group differently.) 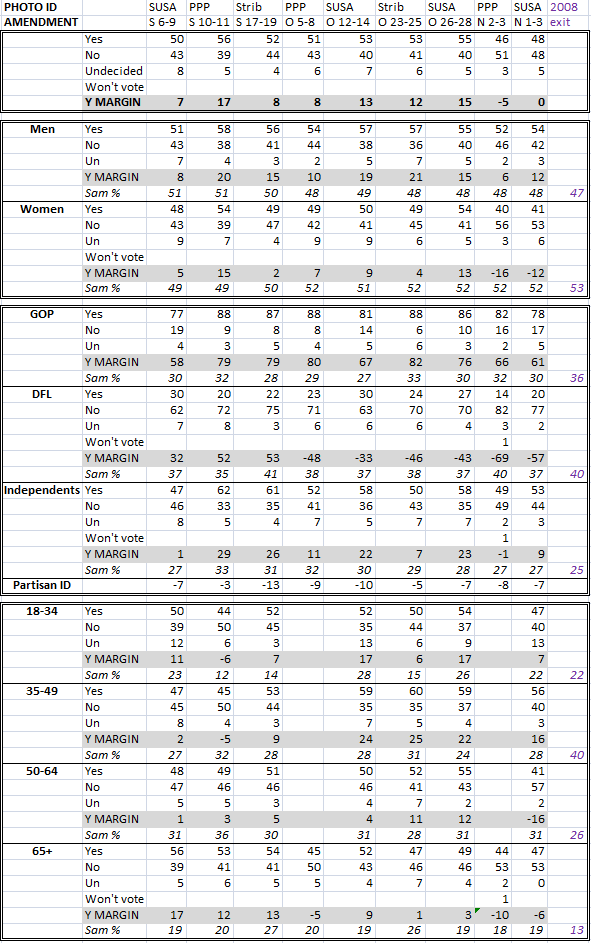 Another succinct way to look at things: The “Vote No Twice” campaign has succeeded brilliantly. (Polling-wise, at least.)

The chart below is from a “Vote No” perspective. The red numbers show how Photo I.D. opposition has trailed the marriage amendment — by as many as 14 points. Now, the toplines march in lockstep.

This makes some sense. More DFLers realize Photo I.D. will hurt them electorally, but marriage cleaves off some cultural conservatives. Seniors evidence the biggest gap: They like the marriage amendment but now firmly dislike Photo I.D. Maybe all those stories about  rounding up long-lost birth certificates made a dent.

The presidential numbers, simply, have turned great for Obama after what looks like a Star Tribune outlier. Note: there are back-to-back PPP polls Oct. 31-Nov. 1 and Nov. 1-2. SurveyUSA’s final Obama margin (+11) is the biggest for them this year, but the lowest was +7 — so really, except for the Minneapolis paper, this has been a stable race. 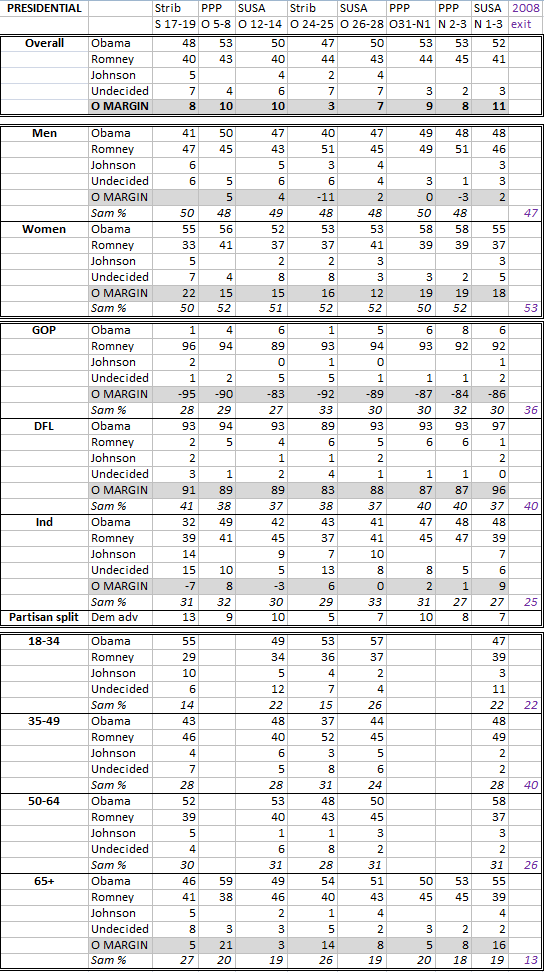 I should probably make a bigger deal out of PPP having the marriage amendment down 7, but unlike Photo I.D., that Vote No number is an outlier for now.

Like the I.D. amendment, most of the change is explained by women peeling away, which affects all the other groups. Thus, it’s no surprise those supporting the amendment (which w0uld elevate a statutory ban on gay marriage to a Constitutional one) are running a gauzy, female-focused ad. 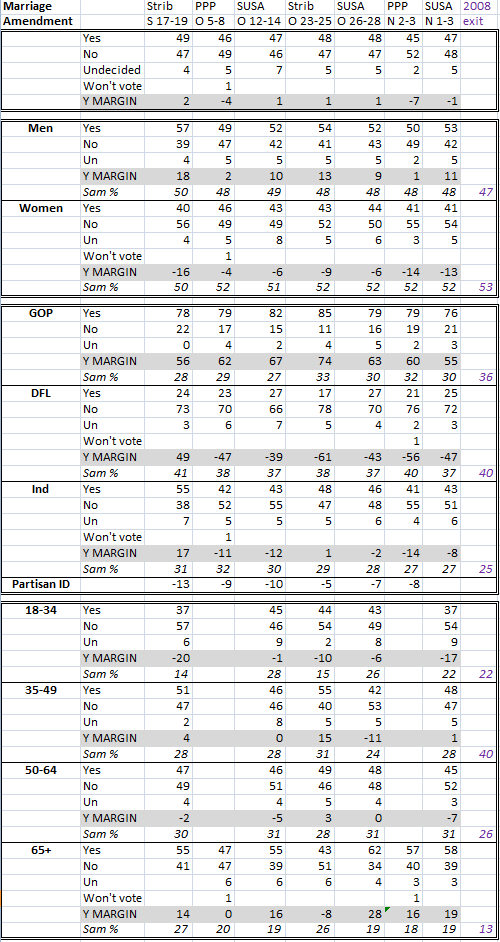 To repeat my disclaimer throughout the election cycle: I am a Vote No Marriage Amendment donor.

Also, subgroups have higher margins of sampling error than the overall result. It’s wiser to focus on the trend than the specific number.