I alluded to this in yesterday’s 1500 ESPN analysis, but the fall radio ratings indicate all six talk stations in the Top 20 — WCCO, MPR News, KFAN, NewsTalk, MyTalk107 and 1500 — are down a little or a lot from a year ago.

Arbitron publishes monthly ratings for the “6+” audience, meaning everybody. It’s not the way programmers make money — they target niches like men 25-54, or hire particularly effective salespeople-hosts — but it gives us a sense of how the market moves. I also received some men 25-54 numbers for the talk stations, and will get to those in a minute.

Regular readers know I publish the numbers regularly, but I’ve reformatted the analysis, adding a three-month rolling average to even out one-month flukes. I’ve also come to believe Arbitron’s panels — who now use wearable meters that detect tones embedded in each station’s signal — are too small, and thus too influenced by a few intense listeners. But since panelists now stay longer than in the diary era (up to 18 months), it’s hard to construct a table that corrects for that. Consider it a caveat.

Overall, here are the topline headlines (November-to-November numbers at right; blue is talk, green is public and the asterisk includes streaming):

Last fall, Buz’n was WLTE, KOOL was older oldies, LOVE105 was also oldies and KTWN was still thrashing around with its KHTC “urban rhythmic” format.

At least for the top lines, the chart below shows every music reformatting increased audience, except KTWN, which is in “Waiting for Gardy-ot” mode; Minnesota Twins radiocasts move there next spring.

Meanwhile, you’ll see every blue station — commercial talk — is off, as is MPR News. In the case of conservative AM station NewsTalk (formerly K-Talk FM), the decline is less than a tenth of a point, but for Hubbard-owned women talker MyTalk and 1500, it’s double digits.

Could it be music programmers rebalanced for audience desires in a way news programmers won’t or can’t? It’s possible the election was a giant audience turnoff; on the sports side, teams were generally lousy both years. 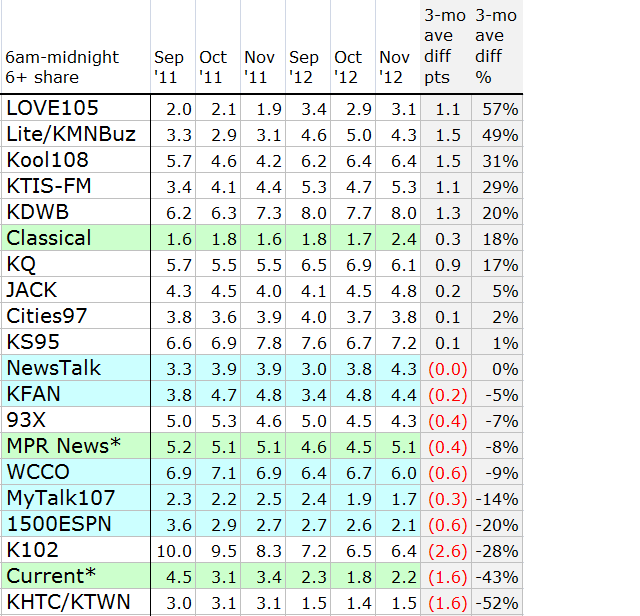 But again, the 6+ numbers just show us mass audience, and radio is a niche medium. Fortunately, I got a look at the men 25-54 numbers, the sweet spot for talk. (Caveats: WCCO aims older and MPR News isn’t as targeted). The data covers Sept.-Nov. 2012.

The highest-rated news talk station is, well, NewsTalk, in 8th place, a hair ahead of MPR News. At least in the male “prime demo,” conservative talk listeners and public-radio listeners basically balance out.

Earlier this year, in a profile of former KQ Morning Crew member Mike Gelfand, I alluded to that show getting beat in the M25-54 demo. That didn’t endear me to Tom Barnard, who called me a “hate-filled progressive” on Twitter. (As Common Man would say, “I always love that one.”)

But to be fair to Tommy B, KQ was only beat in a single month — June 2012, by 93X. My source was astounded — it likely broke a two-decade-plus string — but order has been quickly restored. Looking at September through November, KQ won the 6a-10a time period by a good 30 percent over 93X. Third place KFAN, which laid off Mike Morris after this period, was about three-quarters of a share point behind 93X, with Dave Lee and Dave Ryan rounding out the Top 5.

Dan Barreiro’s clout is evident in the 3-6 p.m. block, where KFAN finishes number one, beating KQ and 93X by roughly 2 share points. 1500’s Soucheray is 9th — a long way from his glory days atop this list, but better than any other 1500 time period. Can Reusse and Mackey improve that standing? We’ll see.

On the public radio side, KNOW is 7th in mornings among prime-demo guys. The station slumps to 13th in middays, when Kerri Miller, NPR and the BBC take over, then rebounds to 5th in the evenings. Over at The Current, the rhythm is 13th, 12th, 16th.