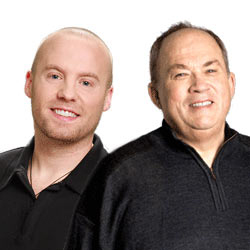 In the Twin Cities sports radio wars, 1500 ESPN has always been a bit like Nate Silver competing with a carnival barker. The Hubbard-owned station is heavy on stats, journalist hosts and analysis; Clear Channel-owned KFAN has the bits, the brashness and the big FM signal.

Though the Hubbards are famously patient owners, 1500 is struggling. The 6 a.m.-midnight audience is off 20 percent over a year ago, fourth-worst among the Twin Cities Top 20 stations. (By the way, none of the six talk stations in the Top 20 are up over a year ago in the rolling three-month average.) Next season, 1500 won’t have Minnesota Twins rights. And their AM signal remains the equivalent of bringing a knife to a gunfight.

Late last week, 1500 announced a line-up reshuffle that (more or less) flips its afternoon shows. In early- to mid-February, Joe Soucheray will air 1-3 p.m. and Pat Reusse & Phil Mackey will be on 4-6 p.m. The station’s highest rated hour — Soucheray and Reusse — remains at 3 p.m., while young guns Mackey and Tom Pelissero will team up 6-7 p.m. Hubbard V.P. Dan Seeman says the noon-1 p.m. spot is still up in the air, though this week’s tryout of Jeff Dubay with 9 a.m.-noon host Judd Zulgad has speculation swirling.

Since nabbing Twins rights in 2009, 1500 has had one obvious problem being a local sports station: its morning-drive show (Mike & Mike in the Morning) isn’t local, and afternoon drive (Sooch) isn’t sports. Of Reusse & Mackey, Seeman says, “They’re our show that’s most on point, that most reflects our brand. Joe’s really important to the radio station — his audience is so loyal they’ll follow him anywhere — but we need to be sports in the afternoon.”

Like me, many sports fans were unwilling to suffer the “Soucheray speed bump,” but haters shouldn’t be too happy. Soucheray has already re-signed for two more years, where Garage Logic — somewhat deliciously — will go head-to-head against another skewed reality: KFAN’s Common Man. Seeman notes 1-4 is pretty close to Sooch’s 2-5 slot on the pre-ESPN 1500.

Aside from being a former host on both stations, I’ve been most interested in the KFAN-1500 tussle for clues to the digital future. I’ve always said the last section of the last newspaper printed will be sports; 1500ESPN.com has made itself into the town’s third sports section — Pelissero is heads and shoulders the best football analyst writing; Mackey is one of the smarter stats guy willing to go into a locker room and Reusse remains a great columnist. Seeman says, only a bit fancifully, “I could see this thing as becoming a website with a radio station, not a radio station with a website.”

In the same breath, he acknowledges digital sales are “OK, not great,” adding “it’s more of a sales issue than a content issue.” To that end, he’s brought in Dan Krolczyk, a former Patch.com and Star Tribune exec, as sales manager.

Still, “good radio trumps all,” Seeman says, bringing us back to the open question about whether that’s what 1500 is doing. I know from my own radio days that facts have only a niche appeal, and that schtick clubs earnestness almost every time.

Love ‘em or hate ‘em, Paul Allen and Dan Cole and Dan Barreiro have great bits going. I’ve always seen analogies between KFAN and KARE-TV: neither is the hard-newsiest and both are incredibly patient cultivating talent (KFAN’s newest show is eight years old).

Personally, when I turn away from some dull MPR segment, I’d much rather hear Zulgad and Pelissero jaw-jack about the Vikings, or Mackey and Reusse pick apart the Twins. Although I think what Allen, Cole and Barreiro pull off requires an underappreciated intelligence, I’ll go with the smart take over the smart bit.

Still, there’s a reason Soucheray remains a speed bump in your sports day: 1500 simply hasn’t found someone sportsy with as much game. Few owners are more patient than the Hubbards, so hopefully the young guns can become comfortable as fuller personalities. It’s either that, or the circus moves on.