Wells Fargo — the San Francisco-based banking giant whose name already graces an iconic downtown Minneapolis tower — could be the tenant for a Ryan Cos. development on four Star Tribune blocks near the Metrodome and the new Vikings stadium, according to two development officials in the briefing loop.

The bank won’t confirm, the mayor won’t say and the developer wouldn’t call back, but if you’ll tolerate unnamed sources, the Strib reported the same scenario Thursday night. The officials I spoke with asked not to be named to preserve relationships with Ryan, a 500-pound gorilla on the local development scene.

The Strib blocks comprise a 2×2 grid between 5th & Park Avenues and 3rd & 5th Streets. According to one official, Ryan’s current vision is buildings north of 4th Street; to the south, a two-block linear park stretching between the Hennepin County Jail and the Metrodome LRT stop.

The park — which unfortunately would also border the Armory and Juvenile Detention Center — is one catalyst for public subsidy, says the official. A vehicle mentioned was tax-increment financing. TIF fronts a portion of redevelopment’s increased property taxes for streets, sidewalks … and potentially green space.

While many policymakers and downtown residents would welcome the jobs and parkland, subsidizing a giant bank-benefitting development a stone’s throw from a giant NFL subsidy may evoke an opposite emotion from many city taxpayers. Did I mention 2013 is a city election year?

Asked about Wells’ involvement, Mayor R.T. Rybak says, “I can’t discuss any tenants they have,” but added “Ryan has not asked me for TIF for the project. I think I have a pretty good track record — I’ve only used it twice: for 1,500 Allina jobs at the Sears building, and 600 at Coloplast.”

If Ryan-Wells materializes, it could almost certainly cast as a jobs project. My other source notes Wells has workers spread out over “a million and a half square feet” of Twin Cities office space and “some of it will be consolidated.” The Business Journal’s Sam Black reported such a search for 300,000 square feet 13 months ago.

“They could go to Brooklyn Park for a fraction of the cost, or Rosemount,” the source said. For Minneapolis, “It’s a killer opportunity” — though considering some jobs are currently in the city, councilmembers may be more motivated by the threat.

Another subsidy vehicle literally involves vehicles. The $975 million Vikings deal includes an obligation for 2,500 V.I.P. parking spaces connected directly to the stadium; presumably the $568 million public subsidy already approved would cover some of that cost. 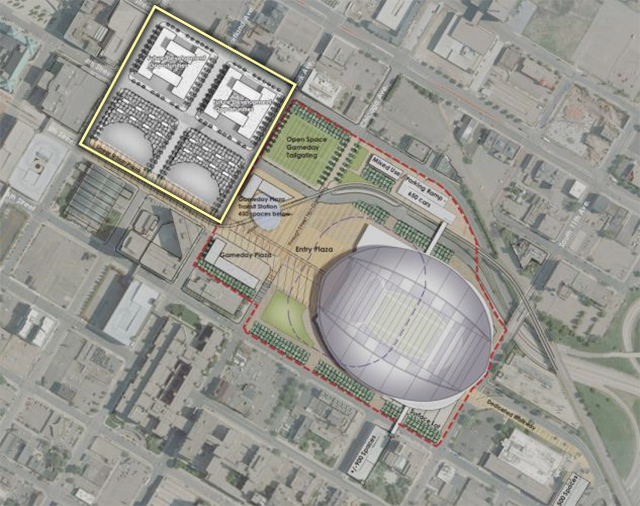 One source says Ryan wants to leverage that parking to serve workers on 355 non-Vikings game days, describing parking as in the “interior” of the development; the other mentioned a two-block-long skyway connection the Vikings dislike, but could be talked into.

Rybak bristled when I mentioned “subsidized parking,” arguing that the public could do the leveraging to nab developer dollars. “The original concept was to have one big parking structure spread out, but there is great support for weaving this into mixed-use [development],” the mayor says. “How that happens is undecided. But I’ve given developers an urgent message: bring investment, match our money. I’ve talked to Ryan, I’ve pushed the Strib — to get parking ramps is critical.”

Tom Fischer and David Wilson, Stadium Implementation Committee co-chairs, say parking is not even close to being sited. Rybak also cautioned against fixating on any specific concept, on the Strib site or other stadium-area tracts: “I’ve seen 50 different conceptual drawings, and I’ll see a whole lot more. There are going to be many different ideas — there is absolutely nothing solid.”

Given that, it’s hard to see how Ryan can do its Strib due diligence in the couple-months exclusive negotiating window several insiders describe — especially if additional public funds are crucial. Then again, timelines can be extended, as the stadium itself repeatedly showed.