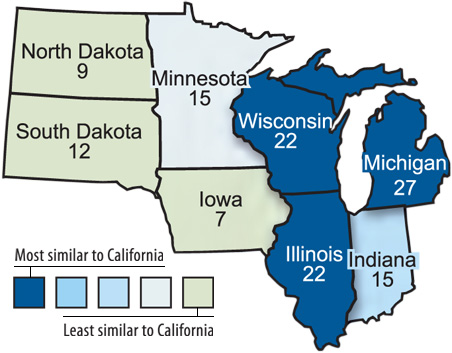 The same pressures that have pushed California toward economic disaster imperil a cluster of Upper Midwest states and threaten to slow the economic recovery nationally, according to a study released by the Pew Center on the States, a research arm of the Pew Charitable Trusts.

Minnesota, Iowa, North and South Dakota are considered in better shape, all ranking below the national average in risk factors, according to the survey “Beyond California: States in Peril.” (PDF)

“The same pressures that drove the Golden State toward fiscal disaster are wreaking havoc in a number of states, with potentially damaging consequences for the entire country,” the study concludes.

“All of California’s neighbors — Arizona, Nevada and Oregon — and fellow Sun Belt state Florida were severely hit by the bursting housing bubble, landing them on Pew’s list of states facing fiscal difficulties similar to California’s. A Midwestern cluster of states comprising Illinois, Michigan and Wisconsin emerged, too, as did the Northeastern states of New Jersey and Rhode Island,” the analysis notes.

“A challenging mix of economic, political and money-management factors have pushed California to the brink of insolvency. But while California often takes the spotlight, other states are facing hardships just as daunting,” said Susan Urahn, managing director of the Pew Center on the States, in a prepared statement. “Decisions these states make as they try to navigate the recession will play a role in how quickly the entire nation recovers.”

Pew’s researchers focused on several factors that put these states at risk. They include:
• Loss of state revenues;
• The relative size of budget gaps;
• Increasing joblessness;
• High foreclosure rates;
• Legal obstacles to balanced budgets — specifically, a supermajority requirement for tax increases or budget bills;
• Poor money-management practices;
• And an unbalanced economy dependent on a major industry.

The study points out that states’ fiscal situations are widely expected to get worse, even if the national economy starts to recover. Federal stimulus money that helped states meet some of their expenses begins to run out at the end of 2010.

In addition, as the economy emerges from a national recession, states historically have their worst years when they are coping with higher Medicaid and other safety-net expenses but revenues lag because of stubborn unemployment.

The Pew Center on the States is pursuing additional research on states under fiscal stress and policy options that might be most effective in helping them find their footing, according to the center.