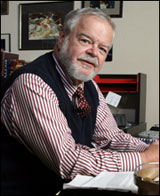 What about that great stock you just want to hang onto forever? Forget it.

Leuthold is the Minneapolis investment guru widely regarded for his mastery of securities market cycles. While the rest of us habitually focus on day-to-day gyrations in the stock market, Leuthold rivets on the long-term. Decades. Sometimes centuries.

He titles his new analysis “Are Google & Cisco Forever?” Absolutely not, he told a University of Minnesota audience last week.

Economist Joseph Schumpeter advanced the idea of creative destruction, the turbulent process of replacing outmoded work with up-to-date jobs, a couple of generations ago. This constant churning keeps the economy vibrant. That’s a big plus overall. It’s also great if you’re on the creative end, but not so great if your job gets destroyed.

“I was surprised,” Leuthold says of the intensity of the churning.

Market value information was lacking before 1960, so Leuthold used assets to track changes back to 1917.

Only your great-grandfather knew about most of those 1917 companies. Ever hear of 1917’s 11th largest, International Mercantile Marine? It was the corporate parent of the Titanic.

No. 63 Cuba Cane Sugar met its demise after Fidel Castro privatized it.

Leuthold says the turbulence has been accelerating, thanks to rapidly changing technology and more acquisitions.

And the churning is worldwide. Leuthold distributed a recent column, by New York Times financial columnist Floyd Norris, to show how quickly the global rankings of the world’s 20 most valuable corporate titans have been changing.

Could the rising turbulence affect the Twin Cities’ strong base of corporate headquarters? You betcha. So far, high-value newcomers like UnitedHealth, Medtronic and Best Buy have pretty much replaced big-hitters that have been acquired or flamed out. But Leuthold’s new study carries an unstated red flag for this region: Given all the tumult, we can’t count on retaining that headquarters base indefinitely.

What led Steve Leuthold to do this particular analysis? Years ago, his brother-in-law inherited a gob of money. The estate went into a trust, which contained just one stock. The rules said the stock couldn’t be sold.

“They said you couldn’t go wrong with that one,” Leuthold jokes. The stock was the Penn Central Railroad.

Economy has a way of felling stock market Goliaths