Investors let out a cry of relief Tuesday after stocks rebounded from steep declines recorded in early trading.

The broad market indexes have been hammered since the start of the year. Eight of Minnesota’s 20 largest-capitalization companies, for example, are down by double-digit percentages since Dec. 31 (see table at the end of this story). Pentair and Supervalu, both down more than 20 percent for the year, have taken the biggest hits.

Only one of the 20, Target, is in positive territory so far this year. Virtually all of Target’s gain came on Tuesday, apparently because of investors’ sense that the stock will benefit from fiscal and monetary policies designed to avert or lessen the impact of a recession by boosting flagging consumer spending. Best Buy also rose Tuesday, going up 2.4 percent, but it remains down 14 percent for the year.

Partial rebound follows Monday’s worldwide fall
Tuesday’s recovery came after stock markets around the world plunged on Monday. Shortly before the U.S markets opened, the Federal Reserve announced an emergency cut in its key short-term interest rate of 75 basis points, to 3.5 percent from 4.25 percent. It was the Fed’s largest such rate cut since 1982.

The U.S. markets had been closed on Monday because of the Martin Luther King Jr. holiday. On Tuesday, they opened in a chilling atmosphere of fear and uncertainty. The broad U.S. stock market indexes wound up down again for the day, with the Dow Jones industrials and the S&P 500 each off 1.1 percent and the Nasdaq Composite down 2 percent. The Dow was down 465 in early trading Tuesday, but it fought back to close off 128. The indexes were down again in early trading Wednesday. French and U.K. stock markets rebounded sharply Tuesday, but European markets dropped on Wednesday. Asian markets, meanwhile, rallied on Wednesday.

In an election year, the Bush administration, presidential candidates and other politicians from both parties are lining up to support tax rebates in order to stimulate the economy. More important, the Fed has shifted into an aggressive rate-cutting mode, hoping to lower the odds for a lengthy and perilous credit crunch.

“The ultimate source of this problem is what happens in every extended expansion,” said Ben Crabtree, a veteran securities analyst with the Stifel Nicolaus investment firm in Minneapolis. “Financial innovation outruns our ability to manage it.”

Crabtree, who follows regional bank stocks for the firm, said a shadow banking system that can’t easily be regulated by central bankers has created huge amounts of debt.

“It was an implosion waiting to happen,” he said of the widespread market declines.

Crabtree noted that bank stocks rose significantly on Tuesday, in a possible sign that they may no longer be lagging behind the market as they have for months now. The credit quality of Upper Midwest banks is solid, except for construction loans, he said.

Battipaglia attributed the sharp declines abroad to a rising risk of recession in the United States, credit seizures in this country and abroad and the “tepid response” to the crisis by U.S. fiscal and monetary policymakers.

“The economy will continue to struggle as consumers are forced to retrench in response to falling home prices and will likely focus on paying down debt,” he said.

Many market commentators said one of the biggest surprises in the market declines abroad is that they suggest when the U.S. economy catches a cold, the contagion still spreads to the rest of the world. That idea runs contrary to what had become the conventional wisdom in many quarters — that faster-growing economies in much of the rest world have “decoupled” from U.S. events and now stand on their own.

Where Minnesota companies stand this year

Here’s a look at how the stocks of the 20 largest Minnesota companies have fared since the start of the year: 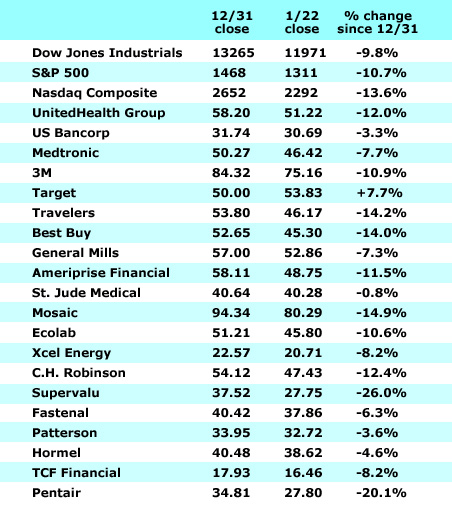