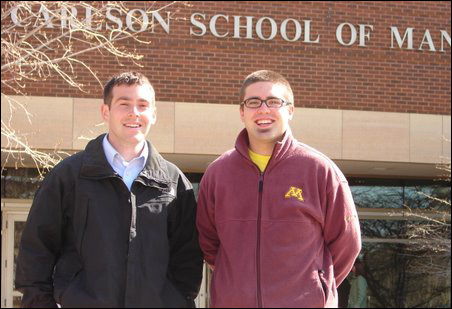 MinnPost photo by Scott Russell
Brian Peterson, left, and Eric Larsen pushed for an undergraduate major in nonprofit management at the Carlson School of Management.

Hmm. OK, so they are not household names, but they have a hand in promoting the next generation of nonprofit leaders.

Larsen is 22, a senior at the University of Minnesota’s Carlson School of Management, and Peterson, 23, is a recent graduate. Both have key roles in Students Today, Leaders Forever, a nonprofit founded to promote student leadership. The organization’s “Pay it Forward Tours” support student-led bus trips that take volunteers across the country during spring breaks for service projects, such as river cleanups. The group even got a recent plug on MSNBC.

“For this to get going, it needed someone to step forward and believe in it fervently,” he said. Larsen and Peterson “were very patient; they were very persevering. They championed this.”

Still, the proposal took hard work. Larsen said when he approached Ruekert about the idea in October 2006, he was told to get something in writing. It would need faculty approval.

Larsen and Peterson got help from student Diana Schleisman and others to craft a proposal. They took it around to various faculty members for critique — and to get their buy-in. Larsen eventually submitted a 24-page proposal.

Students also persuaded Rich Cowles, executive director of the Charities Review Council, and other nonprofit leaders to write letters of support. Jay Kiedrowski, senior fellow with the Humphrey Institute’s Public and Nonprofit Leadership Center, knew both students from his classes and encouraged the idea.

The argument for the new major went something like this. Students were already doing self-designed nonprofit management majors; the pieces were already in place. The major would help recruit students. The school could further its mission by addressing a growing need nationally and locally for nonprofit leaders.

The major lets students focus on the unique management aspects of the public and nonprofit landscape, such as governance and finance. (One of the major’s options is a course called Introduction to Philanthropy.)

The Carlson faculty approved the new major at the end of last school year. Larsen and Peterson had done their homework. The vote was something like 54-1, they said.

This is the first school year students could sign up. It is offered as a second major (coupled with another major, such as finance, marketing or accounting). So far, 20 to 30 students are pursuing it, Ruekert said.

STLF grew out of a late-night chat among friends at Territorial Hall, 10 days into their freshman year, 2003. They were talking about their lives and how to make a difference, Peterson recalled. Soon after, he, Greg Tehven, Irene Fernando and Nick Lindberg started the organization.

They had one bus tour with 43 students in 2004. STLF became a nonprofit in 2005 and continues to grow. Since it started, more than 3,000 students have participated. Peterson and two other founders, Tehven and Fernando, now work full time as co-executive directors. Lindberg and Larsen are on the board.

STLF focuses on developing leaders as much as service. Students plan and lead the bus trips and the individual chapters. The nonprofit supports the work through training, fundraising and other supports.

20-somethings lead the way to nonprofit major at U