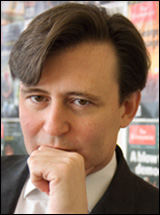 Need a few things to worry about?

Micklethwait, who is editor-in-chief of The Economist, worked his way through the list of anxieties Wednesday in an interview and at a forum sponsored by St. Mary’s University and the Hendrickson Institute for Ethical Leadership.

“Provocative paranoia is probably the best way to look at the world,” he told a Minneapolis audience of about 375 business and public affairs leaders.

If the magazine’s success is any indicator, that’s a perspective very much in fashion in America. The Economist, the cerebral British news weekly that stands watch over the global economy, has become the magazine du jour for elite and intellectually curious readers in America.

He sees ongoing tension with China
“The Olympics, in particular, will be something Americans will remember for a long time,” he predicted, alluding to the summer games soon to play out in Beijing.

Chinese athletes are likely to emerge as world-class performers, often defeating their American counterparts, he said. These achievements will come as the U.S. economy continues to founder and most Americans believe their country is on the wrong track.

“Expect difficult times ahead with China,” warned Micklethwait, who had arrived in the Twin Cities hours earlier after a 14-hour flight from China.

He flashed his magazine’s recent “America’s fear of China” cover onto a big screen. “If you put China on the cover, Americans will buy it,” he said.

One of the stories of the century will be the rise of today’s emerging lands, he said. In 2005, the world’s biggest economies were the United States, Japan and Germany. By 2040, they will be China, the United States and India.

Micklethwait sees perils in the rising opposition of Democratic presidential candidates Hillary Clinton and Barack Obama and other politicians to trade agreements. Such stances are “utterly incredible at a time when the American economy has been kept out of recession by foreign trade,” he said.

Globalization, while unsettling to many, has generated immense economic growth around the world. Now, he said, “there’s a real danger of globalization going into reverse” somewhat as it did a century ago, he said.

“Obama, the man who claims to be a post-partisan centrist, often sounds like William Jennings Bryan.”

Micklethwait also criticized Clinton and Republican GOP candidate John McCain for calling for a moratorium this summer on the federal gas tax. Obama has rejected that idea.

What about the prevailing wisdom that McCain, benefiting from the slings and arrows that Hillary Clinton and Obama are hurling at one another, will win the presidency?

McCain? Maybe not
“I’m not so sure about that,” Micklethwait said. He called McCain’s economic plan “underwhelming,” said his age (71) could hurt him with some voters and argued that he must deal with the concern that as a Republican, he could inherit Bush’s unpopularity. But Micklethwait also noted that The Economist endorsed McCain over Bush in the 2000 primaries.

Micklethwait co-wrote a 2004 book arguing that America’s conservative tilt would endure for many years, but polls show that many voters have swung to the Democrats now. What happened?

“The Republicans have road-tested our theory close to destruction. It presumed a degree of competence which they haven’t shown.”

On the economy, Micklethwait said, “It isn’t the severity of the U.S. downturn that worries me. It’s the length.”

But Micklethwait remains a big fan of America, despite his magazine’s frequent jabs at the country for its shortcomings. “It is fundamentally a country that gets things right far more often than it gets them wrong,” he said.

At the forum, the Hendrickson Institute also honored recently retired Cargill CEO Warren Staley and his wife, Mary Lynn Staley, for their contributions to ethical leadership.

Staley told the audience he would have come to hear Micklethwait even if he hadn’t gotten the award. “Time magazine or the Economist?” Staley told the crowd. “Well, it isn’t much of a choice.”