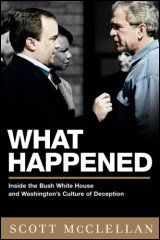 Scott McClellan is stirring up a rhetorical tsunami.

McClellan, who left his gig as President Bush’s press secretary in April of 2006, charges in his new tell-all memoir that the president was not forthright about the Iraq War and positioned himself in a permanent campaign mode that limited his capacity to govern competently. He also writes that the president’s former senior adviser, Karl Rove, and Vice President Cheney’s former chief of staff, Lewis “Scooter” Libby, misled him.

The president’s defenders are firing back, arguing that McClellan’s criticisms are untrue, unfair and disloyal and that he should have made his concerns known while he was still on the job.

There is much more to all of this, of course, but the spotlight should also shine on the publisher. The McClellan book “What Happened” was turned out by PublicAffairs, which focuses on “books that matter.” Peter Osnos, a former Washington Post reporter who later was a top executive at Random House and Times Books, founded the company in 1997 and today serves as its editor at large.

In a “note from the founder” that appears at the end of every PublicAffairs book, Osnos hails his three favorite mentors: the late I. F. Stone, the legendary muckracking newsletter editor who taught himself ancient Greek so he could write his best-selling “Trial of Socrates” when he was 80 years old; Ben Bradlee, the iconic editorial leader of the Washington Post during the Watergate scandal; and Robert Bernstein, onetime chief executive at Random House and founder of Human Rights Watch.

Small imprint, big impact
Today, six large corporations publish about 80 percent of the books sold in the United States, according to Doug Armato, director of the University of Minnesota Press and a recent past president of the Association of American University Presses. The Big Six seek out best-sellers, including much fiction, and work many big-time marketing deals with distributors and retailers. Conversely, PublicAffairs publishes only 45 or so original titles a year, plus about 20 paperback reprints. Almost all are serious nonfiction.

PublicAffairs is one of nine imprints that are part of the Perseus Books Group, which was named publisher of the Year in 2007 by Publishers Weekly. Taken together, all of the imprints could make Perseus nearly as large as some of the Big Six, Armato said. Two years ago, Perseus acquired Consortium, a small St. Paul book distributor.

“With Osnos, you’re dealing with an old-fashioned book editor who knows how to work with an author,” said Armato. “He’s a real veteran, a total pro.”

Lisa Kaufman, marketing director for PublicAffairs and editor of McClellan’s book, said the firm’s all-time best-seller was “Blind Man’s Bluff,” a narrative by Sherry Sontag and Christopher Drew about submarine espionage during the Cold War. It sold 370,000 hardcover copies. HarperCollins bought the paperback rights for $1 million.

From Starr to Soros
Kaufman said some conservative bloggers, knocking McClellan’s book, are branding PublicAffairs as a “liberal publisher.”

Indeed, many of its imprints have tilted that way, and others have been critical of the Bush White House. Public Affairs has published five titles written by Soros, who has championed many liberal causes. In February, it published “No End in Sight,” originally a documentary produced by entrepreneur Charles Ferguson that is critical of the Iraq conflict.

The Wall Street Journal’s staunchly conservative editorial page weighed in Friday, calling Osnos a “left-wing editor” in a lead editorial that seared McClellan and his publisher. The editorial said the board of PublicAffairs parent Perseus LLC includes Democrats Richard Holbrooke and Jim Johnson, the one-time aide to Walter Mondale who is now vetting vice presidential prospects for Barack Obama.

But Osnos’ leading title on his first fall booklist in 1998 provided no comfort for Democrats. That would be “The Starr Report,” the steamy, 421-page saga compiled by independent counsel Kenneth Starr that described in all-to-intimate detail the relationship between President Bill Clinton and intern Monica Lewinsky.

What’s for sure is that McClellan’s book has been exquisitely timed.

The book, which is coming out just as the rugged Democratic presidential primary season ends, has captured saturation media coverage. McClellan is making the rounds of the television news and talk shows: Public TV’s “NewsHour” on Friday, Jon Stewart’s “The Daily Show” on the Comedy Channel tonight, and on and on. His critics are appearing on some of these shows as well, giving the book yet more publicity as they lash out at McClellan.

That’s where Armato picked up the phone when I called him.

In a time when traditional news coverage is thinning out, newsy books are becoming events unto themselves, Armato said. “What Happened” looks like it might quickly become one of them.

“It’s impressive,” he said of the buzz about McClellan’s book. “Everyone here is going to be talking about it.”

Politico.com, which broke the story about the book last Tuesday, reported Sunday that McClellan initially proposed a softer title: “The Unvarnished Truth About George W. Bush: His Former Spokesman Talks Candidly About the President, the Press, Washington Politics, and his White House Days.”

The Politico story, which includes a link to McClellan’s original pitch, suggests that the book got tougher and more focused as it went through the editing process. That would not surprise Armato.

As Armato says of Osnos: “He really knows how to develop a book.”