The dark cloud over the traditional media business looks like a silver lining to Scott Severson.

Severson, ARAnet’s president since 2006, said he’s seeing more opportunities as newspapers and other media organizations cut staff. More than 65 of the nation’s top 100 newspapers, including the Star Tribune, use his company’s ARAcontent articles, he said.

“Newspapers still want to sell [ads in] those sections, but their own content generation is pulling back,” he said. “We generate feature articles that contain high-quality consumer content. They just happen to be underwritten by our clients.”

As an example, Severson cited a recent article that was offered to auto sections. Lexus was the client, “but the article wasn’t about why you should buy a Lexus,” he said. “Instead, the article was about safety systems and mentioned Lexus. The best advertising doesn’t look like advertising.”

Another selling point: ARAcontent articles are free. Clients pay fees starting at $4,500 for creation, tracking and results reporting. Staff writers at ARAnet produce the articles and post them on a proprietary Web site; newspaper editors download the stories of their choice. Other clients include Home Depot, Microsoft, Best Buy and UPS.

Moving online
Yet the advertising business, like all media, is rapidly moving online, and so ARAnet’s main focus is on its Web offering, Adfusion. The service offers similar consumer lifestyle articles to Web sites such as CNN.com, MSNBC.com and more than 2,500 others. But where the print content is “an awareness vehicle,” in Severson’s words, Adfusion is “a direct-response online sales vehicle.”

Unlike Google ads, which invite readers to click on them — the one-click model — Adfusion uses a two-click system. A reader can click on an Adfusion article on the hosting Web site, such as FoxNews.com, and read it without taking further action. But each article also contains a link to the underwriting client. If the reader clicks on that second link, ARAnet gets paid. 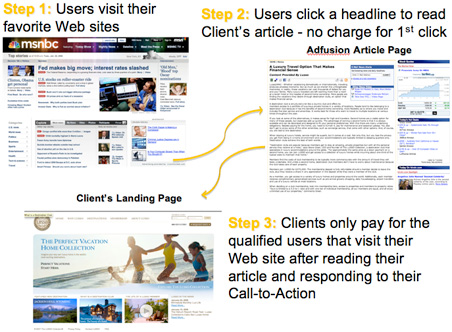 The two-click method weeds out casual browsers, Severson said. Those who read through the content and seek more information are more likely to be motivated buyers. ARAnet gets a minimum of $2 per click with Adfusion, “but we have many clients paying more than that,” Severson said. “We tell clients, if you’re paying 30 cents per click on Google, we’ll meet your conversion metrics even at $2.”

There’s another difference between ARAnet’s online and print content. Where the online articles typically are identified as sponsored content, the print articles merely carry an “ARA” designation, similar to the “AP” identifier that runs with Associated Press articles.

The game is changing
My old colleagues at the Star Tribune will no doubt gnash their teeth at this blurring of the lines between traditional news content and sponsored information. Maybe I would, too, if I still worked as a newspaper reporter. But I don’t, so I won’t. The game is changing, and Severson has successfully planted his flag at the intersection of old media, new media and commerce.

One of Adfusion’s newest clients is Syndero Inc., a direct-response marketer based in San Francisco. Syndero began using Adfusion in April for one product in its Dermitage line of cosmeceuticals. It has since increased its Adfusion buy to five products.

“They’re bringing content that allows the user to read about the product and understand the product, then giving them the option to go further,” said Tim Hamelen, a senior media buyer for Syndero. “It’s an excellent business model for a direct-response marketer.”

Hamelen wouldn’t reveal how many click-throughs Adfusion is generating, but said he’s happy with the number, adding that the sales conversion rate is “excellent — very high.”

“We’ll use them for every new product going forward,” he said.

ARAnet has added 12 new employees this year, bringing total employment to 42, Severson said. The privately held company doesn’t reveal its sales, but Severson said revenue is on track to grow 400 percent between 2006 and the end of 2008 — “and we were already a mature company in 2006.” Adfusion, which became the company’s main focus last year, now provides more than half of ARAnet’s revenue.

“There is no recession in online advertising,” Severson said. “There are big budgets, and people are spending. When all you’re hearing about the economy is doom and gloom, we’re thriving.”

The original version of this post has been corrected to accurately describe how ARAnet’s online and print content are identified. The spelling of Syndero Inc. has also been corrected.