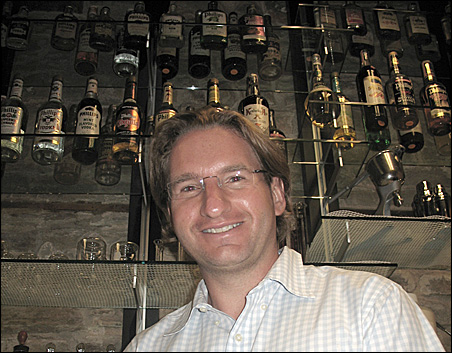 MinnPost photo by John Reinan
Dean Phillips: ‘Innovation for us is a mandate.’

If you believe that alcohol lubricates creativity, then it’s no surprise that Dean Phillips has quietly emerged as one of the more innovative marketers in the Twin Cities. As the fifth generation to head his family’s liquor business, Phillips has embraced and advanced some of the key tenets of 21st century marketing: be bold, be nimble and let the consumer work for you.

“Innovation for a large company is a risk. Innovation for us is a mandate,” Phillips said in an interview at Phillips Distilling Co. headquarters, an historic stone building just across the Mississippi River from downtown Minneapolis.

“We can’t do things with more money or more people. Our aspiration is to find people — customers — who are discoverers and disseminators.”

That approach has yielded one of the hottest products in the distilled spirits business: UV Vodka, whose funky colors and fruity flavors have boosted sales from 7,000 cases in 2001 to a projected 700,000 cases this year.

No big-money ads
UV’s growth, shepherded by the Minneapolis agency Olson, has come without the kind of big-money advertising that the liquor industry’s major players put behind their brands. Total sales of all Phillips products have nearly tripled in the last five years, from 600,000 cases in 2003 to 1.7 million this year. Privately held Phillips Distilling doesn’t reveal its sales, although published reports put them somewhere north of $100 million. 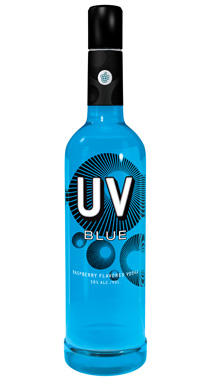 Impressive, but still tiny compared to worldwide competitors such as Diageo, which rang up more than $20 billion in sales last year from brands including Johnnie Walker, Guinness and Tanqueray. Phillips isn’t worried about taking on the big players; in fact, he believes the size advantage lies with his company.

“It’s not the huge companies that are the innovators,” he said. “If you look at the distilled spirits business over the last 20 years, without exception, the runaway successes have come from independent companies.”

UV and other Phillips Distilling brands have been built “one drink at a time, one bottle at a time,” Phillips said. The brands have used Web sites, events and sponsorships to build buzz, trusting to word of mouth to create product awareness among consumers — and liquor distributors, who decide whether Phillips products get shelf space in retail outlets.

“We have gone from being a marketer to being a content provider,” Phillips said, and he wasn’t referring to the contents of a cocktail glass. “Our job is to create photos and tools and content that others can use to build our brand.”

Organic corn
Phillips Distilling’s latest product is a different take on vodka. Where UV is brash, low-priced (about $10 a bottle) and obviously color-enhanced, Prairie Vodka is low-key, more upscale ($20-$25 a bottle) and kosher organic. 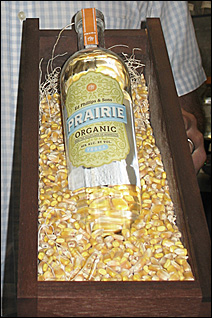 Prairie is made in Benson, Minn., at the same distillery that produces Shakers Vodka. A local cooperative of about 980 farmers produces the organic corn used to make Prairie, which Phillips hopes will help redefine the organic category.

“Organic is not progressive, it’s regressive,” he said. “It’s the way we used to do things. If we can convert the definition of luxury from something made far away to something made close to home, that’s a huge shift.”

With Prairie, Phillips is taking aim at luxury vodkas such as Grey Goose and Belvedere — a brand his father, Eddie, introduced to the U.S. market before selling it to the French luxury conglomerate LVMH.

“We built Belvedere by putting it in the hands of A-list celebrities,” Phillips said. “That was top-down marketing. With Prairie, it’s bottom-up.”

In the Internet era, “people don’t discover brands because they saw George Clooney drinking it in People magazine,” Phillips said. “Now they can discover it before George Clooney.

“Ten years ago, there was no way to send a message to consumers without spending a lot of money. Now, we can go after chefs, foodies and other influencers at little cost.”