The new poster boy for green marketing is standing shirtless in sub-zero temperatures, his shaved head painted in team colors as he waves a giant foam finger to the heavens.

You can have your earnest ex-hippie with his Prius and his hemp trousers. Mark Andrew is going after Joe Sixpack.

Andrew, a former Hennepin County commissioner and chairman of the Minnesota DFL Party, is betting that sports are the way to deliver a message of environmental sustainability to the masses. His company, GreenMark, is working with pro and college sports teams to develop stadium-based sponsorship opportunities that deliver a green message.

“As iconic structures in urban areas, sports buildings have the opportunity to be screaming billboards for environmental sustainability,” Andrew said. “Sports controls 80 percent of all sponsorship dollars, but the universe has basically been fixed on five categories: pop, beer, cars, banks and electronics.

“We are creating a new category of sports marketing.”

‘I’m an excitement junkie’
Andrew left the public relations firm Tunheim Partners last year to pursue an idea that he’d been kicking around for the better part of a decade. After years in elected office, Andrew said, he missed the excitement of politics and the satisfaction of public service. Sports marketing for a cause fills both those gaps nicely.

“I’m an excitement junkie,” said Andrew from his 12th-floor office in downtown Minneapolis, surrounded by a small army of college interns hopped up on Twizzlers and Jolly Ranchers. “When I left elected politics, I needed something to replace it.” 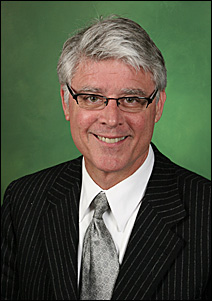 As he explains it, green marketing in the sports arena is more than just putting up a sign or flashing an ad on the Jumbotron. Andrew is looking for ways to build environmental messages into the sporting experiences that are shared by millions of Americans every year.

It could be something as simple as serving soda in biodegradable cups and finding a use for all those peanut shells. Or it could be more high-concept, such as giving incentives to fans who ride a train or a bus to the game instead of driving.

Some of GreenMark’s ideas may be tested in the new Twins stadium, set to open in 2010.

The Twins are building the stadium with some significant environmental features designed in, said Kevin Smith, the team’s executive director of public affairs. Among them: a system to recycle water for maintaining the field, and a steam line from the neighboring Hennepin Energy Recovery Center to provide power for electric generation.

The team also hopes to secure a coveted LEED designation for the stadium. That stands for Leadership in Energy and Environmental Design, the gold standard in green building. It’s a tough standard for an open building to achieve; only one U.S. stadium — Nationals Park in Washington, D.C. — currently holds a LEED certificate.

Thinking big
In addition to the built-in environmental features, Smith said the team plans to aggressively use the stadium as a spur to get Minnesotans to re-examine their views on transportation.

Andrew is thinking even bigger thoughts for the Twins stadium. He didn’t want to publicly reveal his ideas, because he’s still out pitching them. But he shared a couple of his proposals off the record, and they could be truly dazzling if he can find a corporate sponsor to underwrite them.

At any given time, Andrew said, there are 50 to 60 “sports facilities of scale” worldwide either under construction or on the drawing board. That should provide GreenMark with plenty of opportunities to make its case.

“We are seeking to convert organized sports into an industry segment that is leading the way to educate the public on environmental sustainability,” he said. “We’re very much profit-motivated, but we can do it in a way that provides measurable environmental returns.”