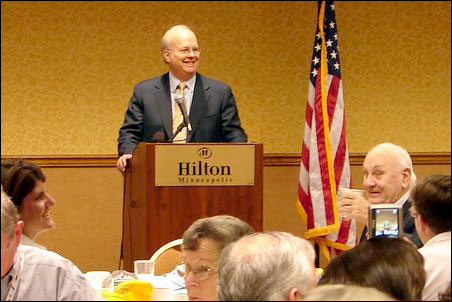 My childhood friend Rev. Dale Kuehne, director of the New Hampshire Institute of Politics at St. Anselm College, is in town for the Republican National Convention and I tagged along to hear him speak at a New Hampshire delegation breakfast meeting.

What we didn’t know was that GOP political strategist Karl Rove was speaking first.

Dale later gave what I thought was a compelling talk on Alexis de Tocqueville, but for political theater Rove’s the guy.

Blowing up the premises
Rove said the Obama campaign is built on two false premises. The first premise is Obama will reach across party lines to work together with Republicans. He hasn’t done it, Rove said. The second is Obama will bring a new urgency to address the country’s big problems.

Obama “has spent the last three years in the U.S. Senate either campaigning or finding out where the men’s room is,” Rove said. “The guy has not spent any time getting involved in the big issues.”

Rove also criticized Obama for arguing that he has more executive experience than Alaska Gov. Sarah Palin, McCain’s vice presidential pick, because he has run a large presidential campaign. Candidates are the product, not managers, Rove said.

“How many campaigns do you know where the candidate is in charge of the campaign?” Rove asked.

Praise for McCain
The Dallas Morning News reported on Rove’s Saturday speech to the South Carolina delegation. The story recalled that in 2000, Bush allies adopted a scorched-earth policy against McCain in the South Carolina primary. “A veterans group held a news conference asking whether Mr. McCain’s years as a POW might have damaged him psychologically.  … Mr. Rove denied involvement, but Mr. McCain blamed him and held a grudge for a while,” the story said.

Today, Rove used McCain’s POW experience to bolster his presidential run. Rove related stories he got from a dinner with Bud Day, a highly decorated veteran and fellow POW with McCain. (Day also was a member of the Swift Boat group that attacked Democratic presidential candidate John Kerry in 2004.)

It is a dangerous world, Rove said. “Now is not the time to gamble with Barak Obama. Now is the time to pick somebody who has demonstrated the courage, the conviction and the character.”