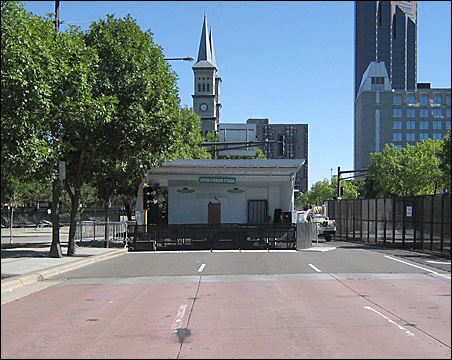 The founders of our nation believed so strongly in the importance of free speech that they wrote it into the First Amendment to the Constitution.

Wonder what they’d think if they paid a visit to the free-speech stage at the Republican National Convention?

The stage, set up in a fenced-off dead end about 100 yards from the Xcel Energy Center, stood empty for hours on Wednesday morning. In a four-hour span, four speakers shared their thoughts, watched by a total of two audience members.

On Tuesday, lots of no-shows
The day before, more than half of the speakers who signed up for afternoon slots were no-shows, according to personnel of St. Paul Parks and Recreation, which is running the stage.

Even the appearance of Wendell Anderson turned out to be a bust. It wasn’t the former Minnesota governor and U.S. senator, but a Kansas rancher with the same name.

Why the lack of interest? Start with the difficulty of getting around in downtown St. Paul, a high-security zone divided by a miles-long maze of 8-foot-high metal fencing, endless concrete barriers and enough soldiers and police to invade a small country.

Although the free-speech stage is admirably close to the Xcel Center — not set up a mile away, as has been the case at some other conventions — finding it and getting to it is difficult.

“It’s kind of creepy, actually,” Degen said. “I thought a convention is supposed to be a celebration; I thought it would be welcoming. But it’s an armed enclave.”

Becky Hall of St. Paul spoke on Sunday. She said that some of her friends declined to attend for fear of getting Maced by police. Her mother wanted to watch the speech, but she can’t get around very well and decided the difficulty of navigating the convention area was too great.

Hall’s husband, Bryan Fish, spoke at 9 a.m. Wednesday to an audience of one: his wife. He spent his time reading a portion of the articles of impeachment against President George W. Bush that were introduced in Congress by Rep. Dennis Kucinich, the Ohio Democrat.

Despite the lack of a crowd, Fish said he was glad he spoke out.

“People at the top of our government are not supposed to be above the law,” he said. “That’s the foundation of our country. If that goes, we’re not a republic anymore.”

Lunchtime crowd watched three O’Connors
By noon, the lunchtime crowd was on the streets and about a dozen people wandered over to watch the O’Connor family of St. Paul take the stage: dad Michael, son Joe and daughter Anne.

“People need a deeper understanding of healthcare economics,” she said before her talk. “Health care isn’t like buying a sweater.”

O’Connor said she was “a little bit” discouraged by the lack of turnout at the free-speech stage.

“It would have made a lot more sense to put this area in a high-traffic zone,” she said. “People might stop and listen for 10 minutes and learn something.

“But this is what we have, so we’ll work with it.”