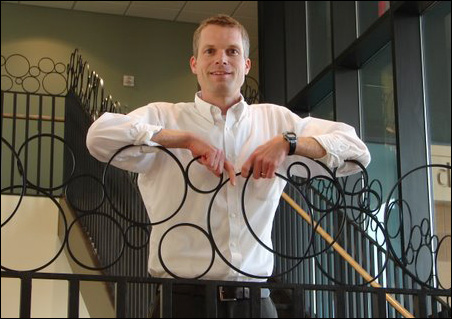 MinnPost photo by Scott Russell
Jonathan Sage-Martinson is coordinator (and the first employee) of the Central Corridor Funders Collaborative and Learning Network.

So far, 10 foundations have helped set up the Central Corridor Funders Collaborative and Learning Network. In June, the first employee was hired: coordinator Jonathan Sage-Martinson.

The underlying mission is to maximize light rail’s benefits, “particularly for those who are most vulnerable and who would not benefit if there was not some kind of proactive action,” said Sage-Martinson.

The library shelves are full of reports of initiatives and collaborations that were going to do great things but never lived up to their promise. This one has a few things going for it, including a defined geography and a time limit, which give the project focus.

Plus, the foundations have already chipped in $5 million toward a $20 million goal over the 10-year project.

Sage-Martinson is the former executive director of Sparc, a community development agency serving St. Paul’s Hamline Midway, North End and South Como neighborhoods. In that role, he was appointed to the St. Paul Central Corridor Development Framework Task Force, which addressed land use, economic and other impacts of the LRT line.

LRT construction starts in 2010, and the trains start running in 2014. The line, which will connect downtown Minneapolis and downtown St. Paul, will have big impacts on the housing and business economy along University Avenue. For instance, University Avenue’s east end historically has provided inexpensive opportunities for new business startups, Sage-Martinson said. Development pressure could change that, as property values rise.

One approach could be to help existing small businesses buy property to eliminate their vulnerability to rent hikes, he said. Another approach is to create ways to maintain inexpensive rental space for new entrepreneurs.

Three strategies
The foundations’ work is still taking shape, but it will have three basic strategies. It will create a learning network to share information among funders about what has happened with similar transit projects in other cities and identify issues specific to the Central Corridor.

Second, it will establish working groups of public, nonprofit and business members and other interested parties to focus on affordable housing, small business economy and other issues. It’s an effort to generate ideas and create broader community partnerships.

Last, a subset of foundations has created a Catalyst Fund to pay for information gathering, collaboration and leverage money for some of the ideas the working groups develop. The collaborative, which plans to raise $2 million a year for the project’s 10-year time frame, has already raised $5 million.

One of the first things on the group’s agenda, said Sage-Martinson, is exploring transit-oriented development opportunities at various places along the corridor.

How it got started
Dan Bartholomay, program manager for the Minneapolis-based McKnight Foundation, said the kernel of the collaboration started more than a year ago at the St. Paul Riverfront Corp.’s annual Millard Fillmore dinner. He and John Couchman, vice president of grants and programs at the St. Paul Foundation, sat at nearby tables and started talking about the community impacts of the proposed light rail line.

They decided they needed to learn more. They extended an invitation to other foundations to learn with them. (Many foundations already were working in the neighborhoods up and down University Avenue.) They didn’t know at that point it would evolve into a formal collaborative.

Roger Williams, senior fellow and director of neighborhood development for the Baltimore-based Annie E. Casey Foundation, said Casey learned about the project through McKnight. (Both foundations participate in Living Cities, and the Funders Network for Smart Growth and Livable Communities.)

Casey participated because it has a strong interest in promoting mixed-use development, Williams said. It wants to learn how to handle transit-oriented development in a smarter fashion and to apply those lessons to other cities. The work around the Central Corridor could be precedent-setting.

The group met quarterly, bringing in the Center for Transit Oriented Development to provide background research and answer questions. Members decided to formalize their work.

“Up until three months ago it was a concept,” Bartholomay said. “Now we are putting the pieces in place to make it functional.”

Seeking more partners
Bartholomay said foundations have collaborated before around topics such as early childhood education. But it is rare for them to collaborate on land-use issues. (One other example is New York’s One Region. [PDF])

“The other thing that is somewhat unique here, we put this collaborative in place well before the rail is built,” he said.

In addition to McKnight and the St. Paul Foundation, five other foundations have contributed to the Catalyst Fund: the Miami-based Knight Foundation, F.R. Bigelow Foundation in St. Paul, the Minneapolis Foundation, the New York-based Surdna Foundation and the most recent addition, St. Paul Travelers Foundation.

Three other foundations are part of the Learning Network. They will use what they learn to shape their individual giving. They are: Casey, the Otto Bremer Foundation in St. Paul and the Minneapolis-based Phillips Family Foundation.

Bartholomay said the Catalyst Fund wouldn’t raise all the money needed for a big impact. “It is catalyst money that will attract attention,” he said. “More importantly, it will help create the kinds of concrete implementation plans that would be exciting to other funders.”

Those interested in shaping the funding decisions need to get a seat at the table. The Catalyst Fund will consider ideas generated by the work groups; it doesn’t plan to issue Requests for Proposals.

Sage-Martinson invites anyone with ideas about the corridor to contact him. The group also invites other foundations to participate in the Learning Network, the Catalyst Fund or both.