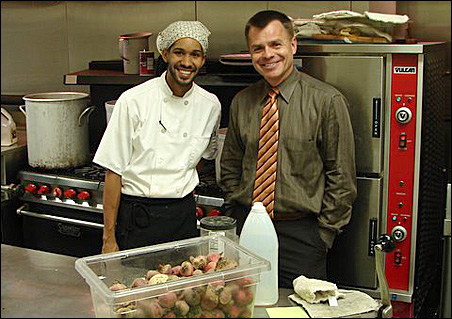 Even with a fragile economy and human services nonprofits bracing for cuts, here comes Open Arms of Minnesota planning to build a new facility and to double a roughly $1.5 million operating budget in two years.

Open Arms is sort of a Meals on Wheels for the chronically ill. It began in 1986 delivering free, nutritious meals to people with HIV/AIDS. In 2005, it started serving breast cancer patients going through disabling treatments, and then people with multiple sclerosis and ALS (Lou Gehrig’s Disease).

When I first got the press release about Open Arms’ groundbreaking for this Saturday, I nearly chucked it. I don’t do groundbreakings. But I was curious. How does a human services nonprofit plan for rapid, sustained growth in a crummy economy? How does Open Arms decide which new diseases to cover? Why breast cancer but not lung cancer? Why MS but not liver failure?

First, a quick snap-shot. Open Arms operates a small storefront in south Minneapolis. It will prepare approximately 250,000 meals this year from a relatively small kitchen with a single stove. It has 16-plus full-time equivalent staff, but 1,400 volunteers. It has maxed out production capacity, serving 500 clients weekly (lunch, dinner and breakfast snack, Monday-Friday.)

Open Arms is in the middle of an $8.1 million capital campaign ($5.6 million raised) to build a new 23,000-square-foot facility with a much bigger kitchen on the former site of the Commodore Bar, 2500 Bloomington Ave. S. It’s slated to open in late 2009. The organization wanted to stay in the Phillips neighborhood because many clients live there. The site has good freeway access and it’s central to its I-494/694 loop service area.

Open Arms’ plan is ambitious, Winge said. “We are rolling the dice on this and trusting that the community will support it.”

Part of the growth gamble comes from believing that Open Arms has a mission that people get. “You don’t have to have cancer, you don’t have to have AIDS, to understand what Open Arms does,” Winge said. “We have all had the flu or been sick at some point and not been well enough to go grocery-shopping or to cook meals for ourselves. The difference is that most of us have a family member to get us through that illness. The majority of our clients don’t.”

Who gets served and who doesn’t?
Open Arms has long faced an ethical quandary. When people with other diseases call for help, they find it tough to say no.

Boiled down to simplest terms, the answer is: “Sorry, you have the wrong disease.”

It’s a quandary for many profits. Where do you draw the cut-off line? Open Arms chose to move that line — gradually — out from HIV/AIDS clients to include other chronic and progressive diseases.

(Open Arms also hoped that adding breast cancer patients would help fundraising, but Winge said that was the last consideration.)

In September 2005, Open Arms added MS, a disease that also affects more women than men. Further, Minnesota has one of the highest MS rates in the country, so it seemed like a good choice, he said. Lastly, Open Arms added ALS.

Each new group added kitchen complications. Breast cancer patients had nutritional needs similar to those with HIV/AIDS, but they needed milder-tasting meals to reduce the nausea-inducing smells.

Choosing three different diseases with different diet challenges gave the kitchen staff the chance to learn, Winge said, putting it in a better position as the organization expands its services.

On a limited basis, Open Arms has already expanded services to people with lung cancer, Huntington’s Disease, liver failure and other diseases.