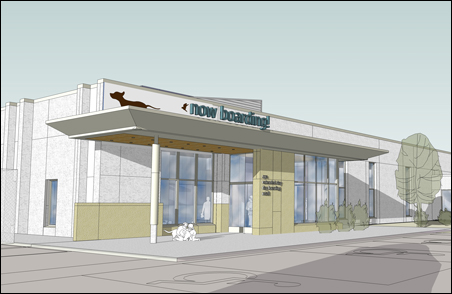 Courtesy of the Animal Humane Society

The nonprofit Animal Humane Society is romping into the for-profit world Nov. 19, when it plans to open its new pet boarding and grooming facility near the airport. The venture carries the risks and rewards of any business.

Earlier this year, the Humane Society submitted a winning proposal to use Metropolitan Airports Commission land for the project. Before the facility has opened, it has already faced the run-of-the-mill business challenges.

But here’s the upside. Now Boarding gives the Humane Society a shot at a new revenue stream in tight-budget times. (It depends on private donations for two-thirds of its funding, and fees from pet adoptions and other services for the rest.) Now Boarding’s goal is to break even in 2009, but to increase profits over a five-year period to generate $400,000 annually, said Janelle Dixon, president and chief executive officer.

“The board looks at the Now Boarding project as something that will ultimately provide a substantial return on investment that will fund the work of the Humane Society long term,” Dixon said. (The MAC lease runs 15 years with a five-year option.)

Keeping donor intent
The Humane Society created Now Boarding as a separate, for-profit entity with its own board of directors. That might be more than most nonprofits would tackle, but many clearly are looking for such revenue-generating ideas.

The Humane Society wants people to know their annual gifts aren’t getting funneled into the for-profit business, said Laurie Brickley, director of marketing and communications.

“It was important to us not to use donor funds that were given to serve homeless and unwanted animals [for the] boarding facility,” she said.

It will cost $4.25 million to build, expand and refurbish the boarding facility. The Humane Society did use $750,000 from board-restricted funds for the building. The rest of the capital and operating money will come from either program revenue or loans. (Board-restricted funds are described as a sort of endowment, a pool of no-strings-attached money the nonprofit has built through such things as bequests.)

The Humane Society also tracks the staff time spent working on the business. Once up and running, Now Boarding will reimburse the nonprofit for those services.

Pet perks
And now we pause for these messages.

Now Boarding, at 28th Avenue South off of the Crosstown highway (near the unauthorized dog park), will be open 24 hours a day year-round. (Customers, for example, can drop pets off at 5 a.m., pay $14 a day parking fee, grab an airport shuttle and catch their 7 a.m. flight, Brickley said.)  The Humane Society already is taking reservations.

The facility will house 141 animals (96 dogs, 30 cats and 15 miscellaneous small critters). The pet “suites” will be organized in concourses. Dog suites range from $34 to $42 daily, depending on suite size. The cat suites are $23. Additional pet services will range from an additional half-hour of playtime to pet massage, shampoo and therapy pool. There is even a pawdicure.

To tell holiday travelers earlier enough about their range of services, Now Boarding will launch its advertising and marketing campaign Nov. 1, Dixon said. It will include billboards, in-flight magazine articles, and 30-second spots on the airport’s CNN terminals.

Marketing nonprofit expertise
The Humane Society acknowledges some friction with for-profit businesses, but Brickley declined to elaborate other than to say the Humane Society is looking for ways to work with local for-profit boarding facilities, such as referring customers to them when Now Boarding is full.

The Humane Society’s board even wrestled with the idea of crossing into the for-profit world. Dixon said some people feel it’s taboo for nonprofits to compete in the marketplace, even if there is a level playing field.

Each nonprofit has developed expertise based on its mission. In the Humane Society’s case, it has run a boarding facility at its Golden Valley site for years and understands the business model. The question nonprofits face, Dixon said, is how to go beyond their four walls and capitalize on that expertise in a way that sustains and grows their work.

The Humane Society is eying more business opportunities by marketing its administrative skills, an outgrowth of its work on Now Boarding.

The Humane Society is looking at the next step. For a fee, it could provide administrative support for small nonprofits that can’t afford to hire specialized staff, she said.