I’ll admit, when I first heard of Twitter a couple years ago, I thought it sounded goofy. A service devoted to transmitting the random thoughts of average people? No, thanks. Why would anyone want constant updates on the daily activities of strangers?

I’m not the only one who felt that way. I remember hearing others mock Twitter in the early days: “I’m having a sandwich. I’m taking a shower. I just planted begonias.” Who cares?

Answer: More than four million people – and some of America’s most prominent businesses.

For those who’ve never heard of Twitter, it’s the leading microblogging service. Users sign up for a free account and then write short posts, or “tweets,” on their computers or cell phones. Tweets are limited to 140 characters and anyone can see them, but Twitter users typically develop a network of people whose tweets they pay attention to, or “follow.”

Twitter is becoming an increasingly important marketing tool. Among the name-brand companies aggressively incorporating Twitter in their marketing efforts are Comcast, Dell, Zappos and Whole Foods. 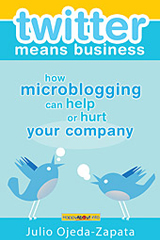 Julio Ojeda-Zapata, the longtime Pioneer Press technology reporter, took some time off this summer and studied the Twitter phenomenon. He wound up writing a book, “Twitter Means Business,” scheduled to be released this fall. My agency, Fast Horse, recently hosted Ojeda-Zapata for a discussion of Twitter and its uses.

“Companies ignore Twitter at their peril,” he said. “It has become a hugely valuable tool. It’s a big group and there are a lot of influential people using it.”

Big brother?
I can attest to that. We monitor Twitter traffic for one client and are recommending that another begin sending out its own Twitter feeds. Ojeda-Zapata gave us several examples of businesses that have successfully used Twitter to connect with their customers.

Comcast, for example, has an employee monitor Twitter feeds for customer problems. Ojeda-Zapata was having an issue with his own Comcast service one day recently and wrote a tweet about it. Five minutes later, he said, his phone rang. It was a Comcast rep offering assistance.

Creepy Big Brother? Or just good, responsive customer service? You make the call, but it’s an indication of how things happen on the Web. Another story involved the computer maker Dell. A woman on Twitter was musing about whether to buy an Apple or a Dell. A high-ranking Dell official engaged her in a days-long public conversation through multiple tweets, answering her questions and explaining the benefits of his company’s product.

She eventually bought a Dell – and thousands of people followed the conversation that led to her decision. As an added bonus, she was a well-known “mommy blogger,” and she’ll undoubtedly wind up influencing the purchase decisions of others. That’s exactly the kind of ripple effect online marketers dream of.

This sort of one-to-one relationship building is still in the experimental stages, and not everyone hits the jackpot by converting an influential blogger to their product. It’s more time-consuming and perhaps less cost-effective than the mass marketing that dominated the last 100 years. Yet there’s no doubt that a growing segment of consumers prefers to get its information this way.

“Marketers need to develop relationships with their customers, engage in the conversation,” Ojeda-Zapata said. “Twitter is about relationships; the business and the money come along for the ride.

MinnPost is on Twitter as well, where you can receive content updates, get breaking news alerts, and find out when we’re having a sandwich or taking a shower or when we just planted begonias.