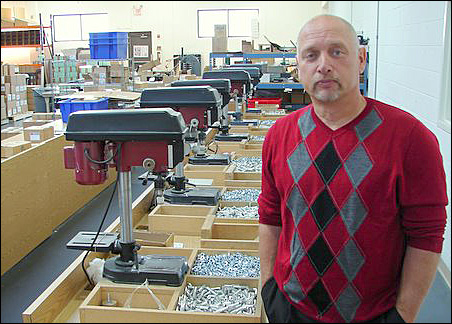 Merrick, Inc., is one of many nonprofits that run supportive employment programs for people with developmental disabilities and, for the first time this year, it will start withholding Social Security and Medicare (FICA) payments from workers’ paychecks. A Ramsey County contract imposed the requirement.

Clients at Merrick’s Vadnais Heights facility make piece rate. Some earn as little as $500 a year; top earners might make $9,000. When I heard about the FICA issue, my gut reaction was: “Come on. Let ’em keep the money.” The more I learned, the more complicated it got.

The story began when I met Merrick’s executive director, John Wayne Barker, at a workshop on nonprofit social enterprise. Merrick seemed to be the latest example of an entrepreneurial nonprofit butting up against the tax code. But soon the story morphed, veering off into workplace inclusion, minimum-wage policy and the definition of what it means to be an employee.

Merrick’s story
Back to the beginning. Merrick serves about 350 adults with developmental disabilities, from mild to profound. Some businesses hire Merrick’s participants directly. The business writes them a paycheck, withholds FICA and issues them a W-2 at year’s end.

Merrick also employs about 225 adults directly. Businesses contract with Merrick for products and services. Merrick trains clients and pays them based on productivity (technically termed a “commensurate wage”). Depending on their skills and interests, clients might recycle plastic bags, put greeting cards into sleeves or put together a nut-and-bolt assembly. Other crews work off-site, doing jobs such as cleaning hotel rooms.

Ramsey County contracts with Merrick and seven other “day training and habilitation programs.” The FICA withholding requirement means workers get $7.65 deducted from every $100 earned. (Merrick also is taking a $50,000 annual hit for its share of FICA and payroll administration.)

Andrea Zuber, Ramsey County Human Services Manager, said the county began the requirement in January 2006 and Merrick is among the last to comply. “It is about our belief that people with intellectual and developmental disabilities are just like other workers and issuing W-2s is comparable to practice in the private market,” she said.

Tax tangle
Merrick used to report its participants’ income on Form 1099 (the form companies use to report payments to independent contractors).

I am familiar with the 1099. Freelancers are independent contractors, and every year I get 1099s. Every year I get confused about some income or expense issue and end up calling the IRS with questions. I found Merrick’s situation yet one more head-scratcher.

I pay that double FICA. Ouch.

Barker said at no time were any Merrick clients paying the double FICA. “They were paying no FICA,” he said. The old system “was beneficial to clients.”

Here’s the wrinkle. When I get a 1099 for my freelance work, my income shows up in Box 7, “nonemployee compensation.” Barker said Merrick reported clients’ pay in Box 3 “other income,” and it is not subject to FICA.

I went online to find the Form 1099 instructions (PDF) and Box 3 is where you report income of $600 or more “that is not reportable in one of the other boxes on the form.” Examples include prizes and awards, punitive damages and payments to patients in a Veteran’s Administration hospital or domiciliary receiving therapeutic services.

Barker said a local law firm reviewed Merrick’s methodology and determined its process was just as likely to be found accurate as if it issued a W-2.

Back to forms …
I checked with the IRS, asking if it had a policy to help nonprofits in Merrick’s position sort out employment issues. The IRS referred me back to forms and instructions, including the Form SS-8, (PDF) that allows any employer to request a determination of worker status.

It seems illogical to call Merrick’s clients independent contractors. Merrick is supervising them and directing how they do their job, hallmarks of an employer-employee relationship. Yet Barker said by other measures, Merrick’s clients aren’t employees. Merrick doesn’t hire them; it enrolls them. It doesn’t do performance evaluations. It doesn’t hold them to personnel policies. Further, Merrick has detailed medical information on clients because it is responsible for their safety and well being—not the kind of information employers are supposed to have about employees.

Barker wants a proactive discussion on employment status, including government and nonprofit representatives.

What about the retirement plan?

I called Lyth Hartz, president of Midwest Special Services, another Ramsey County-contracted day training program, to see if he shared Merrick’s concerns. Midwest has issued W-2s to its clients for years, he said. (One of its other funders required it a long time ago.)

But Hartz said employment status is controversial. Some people question why workers who make so little should pay FICA. But some workers with developmental disabilities (and family members) don’t mind paying it, he said. FICA supports programs that help people with disabilities. Some people see paying FICA as one way to give back.

Like Barker, Hartz said clients’ employment status raises tough questions. For instance, if clients are employees, are they eligible for the nonprofit’s employee benefits, everything from workers compensation and health care to retirement?

“There is no way we could ever afford a retirement plan for them,” Hartz said. “That would put us out of business.”

“Up until the most recent economic downturn, we were making progress,” he said.

‘A thing of the past’
The supportive employment field is changing. Anne Henry, an attorney with the Minnesota Disabilities Law Center, said in some parts of the country the self-advocacy movement is pushing initiatives so that workers with disabilities no longer get paid subminimum or “shelter” wage. The issue surfaced in Arizona in 2006 and 2007, see here (PDF), here and here (PDF).

Ramsey County’s Hammond said the center-based group employment such as Merrick is very common now, “but it is quickly becoming a thing of the past.”

“It is a slow process,” he said. “The objective is to get individuals with disabilities, even significant disabilities, out working individually, side-by-side with people who are not disabled. That is the objective. That is hard to see now. That is where the field is moving.”

Barker again offered the counterpoint. People with developmental disabilities should continue to have choices about their work site, including working with peers in a group setting, he said. “Integration can be a challenging experience for the person who is the exception to the norm.”