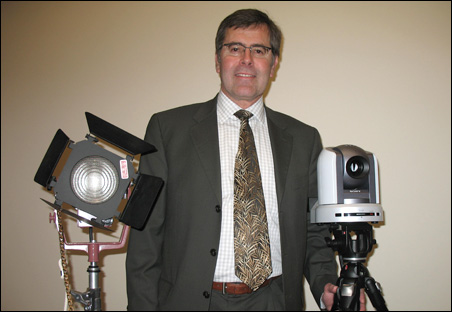 There are more than 22,000 lawyers licensed to practice law in Minnesota, and each of them is required to complete 15 hours of continuing legal education a year.

So you might think that a local company with some 30 years of experience in CLE would merely have to open its doors and let the customers stream in.

It’s not quite that easy, said Peter Berge, web education director for Minnesota CLE. The non-profit corporation, which is affiliated with but financially independent from the Minnesota Bar Association, is seeing more and more national competitors as the Web makes distance education more feasible.

So Minnesota CLE is fighting fire with fire, boosting its online offerings and ramping up its marketing to retain its dominant position in the Minnesota legal education marketplace.

Headquartered in St. Paul, Minnesota CLE maintains its training facility at the City Center in downtown Minneapolis. Along with a large auditorium and several smaller classrooms, the training center features a studio built specifically for webcasts.

That might not seem like a big deal, but it stands in contrast to many other competitors, whose Web offerings often consist of rehashed recordings of standard large-group seminars.

“Our webcasts are more like a talk show,” said Berge, showing the set’s décor of comfy, padded armchairs and coffee table. “We want it to seem more informal for the viewing audience. In the history of television, there’s a reason why there are very few successful lecture shows and many successful talk shows.”

Minnesota CLE will present about 150 in-person seminars this year and about 170 webcasts, Berge said. Many of the live seminars, often lasting two or three days, are geared toward fully satisfying the yearly CLE requirement of 15 hours. The webcasts, by contrast, typically last one or two hours.

Webcasts are especially appealing to practitioners in outstate Minnesota and to lawyers in other states who want to keep their Minnesota status current. The webcasts have enrolled lawyers from 43 states as well as China, Finland and other international locations.

Minnesota CLE traditionally has relied on “good old direct mail” to get out word on its programs, and direct mail still works well as a marketing vehicle, Berge said. But the group is steadily increasing its e-mail marketing, which seems to be particularly effective for webcasting, he said.

Berge created a web site, SmallFirmSuccess, geared to solo and small-group practices — an important CLE audience, since many large firms have their own in-house training programs. In addition to news items and video podcasts, the site offers practical advice on technology, office management and other aspects of law firm management.

Such social networking “is not easy,” he said. “It’s a lot easier to pay someone a few thousand dollars – or maybe a few hundred thousand — to make an ad. But I think the best marketing is when you become a trusted part of a community.”