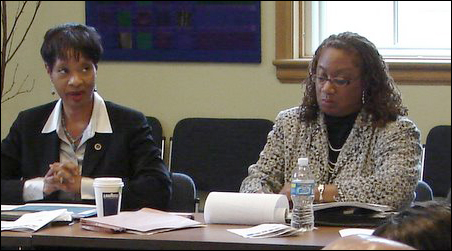 Faith-based initiative was the buzzword during the Bush administration. The Obama administration will carry the work forward under a revised title: White House Office of Faith-based and Neighborhood Partnerships. (Emphasis added.)

Yet for Minnesota, one casualty of state budget cuts could be Lee Buckley, Gov. Tim Pawlenty’s special adviser on faith and community service initiatives. Since 2005, when her job was created, Buckley has worked to strengthen communications and connections between the government and faith-based nonprofits. She is a one-person office and her position is eliminated in the governor’s budget proposal, she said.

This was not the news nugget I expected when I signed up to attend the Thursday breakfast meeting at the St. Paul Area Council of Churches. I joined a group of about 30 nonprofit and government staff to hear Joyce Thomas, the lead regional administrator on faith-based initiatives within the U.S. Department of Health and Human Services’ (DHHS) Administration of Children and Families.

Thomas was in town to give a keynote speech to the Servant Leaders’ Support, Inc. kick-off event later in the day. Buckley organized the breakfast meeting with nonprofit leaders so they could get an update on federal initiatives.

High-level plug for Minnesota office
At the outset, Thomas put in a plug for Buckley. Thomas (a good ally to have) said 36 states have some form of faith-based and community partnership office. She was surprised that Minnesota might dismantle its office.

Thomas gave the Cliff Notes version of stimulus spending. The DHHS Administration of Children and Families would get $11 billion of the $787-billion package. There’s an extra $1 billion for Head Start, $1.1 billion for Early Head Start, $2 billion for the Child Care Development Block Grant, and so on. Some federal proposals were still in development, and she couldn’t say very much. She did give a heads up that an announcement was imminent on the new $50 million Strengthening Communities Fund. (It will help nonprofits and faith-based organizations with economic recovery work.)

Chemberlin appointed to Presidential Council
In related news, Rev. Peg Chemberlin, executive director of the Minnesota Council of Churches, was appointed to the newly created President’s Advisory Council on Faith-Based and Neighborhood Partnerships. It consists of 25 religious and secular leaders and scholars from different backgrounds.

Among her duties, Chemberlin will work on the Economic Recovery and Domestic Poverty Task Force. Its first meeting is today.

Chemberlin didn’t ask for the appointment, but thinks she got the nod because she is president-elect of the National Council of Churches. She brings a rich set of national connections to the President’s Advisory Council, both through the Council of Churches and through her work with the National Association of Ecumenical & Interreligious Staff. (One of the Obama administration’s priorities in this area is to work across faith traditions.)

Minnesota has done a lot of anti-poverty work that could be a national model, she said — for instance, the Legislative Commission to End Poverty by 2020 report. It “could be a wonderful document to put forward to the Obama administration,” Chemberlin said. “This is what we’ve discerned needs to happen to end poverty in Minnesota. Which of these strategies would be helpful at the national level?”

Payments delayed are problems compounded
On an unrelated note, one of the upshots of the economic downturn is that nonprofits are getting delayed payments from government agencies, according to the Washington-based Alliance for Children & Families. Patrick Lester, senior vice president for public policy, said states are passing their cash-flow problems onto nonprofit organizations.

The Alliance recently released survey results (PDF) saying that nonprofits in at least 19 states, including Minnesota, report problems with getting timely reimbursement. Delayed payments have forced many nonprofit agencies to tap credit lines. Many say their credit either has been cut back or has higher costs.

Three of five responding agencies in Minnesota reported delayed payments from state and county agencies, including from Hennepin County, the Minnesota Department of Human Services Chemical Health Division and State Medical Assistance, the report said. “The delays of up to four months have affected childcare and child protection services.”

(MinnPost requested the names of Minnesota nonprofits experiencing problems. The Alliance contacted respondents to get permission to release their names. As of deadline, none had responded.)

Sen. Charles Grassley, R-Iowa, drafted a stimulus bill amendment to try to help nonprofits. It said for states to qualify for increased Medical Assistance payments, each state had to certify that it “is current on its contractual obligations with non-profit organizations that deliver human services on behalf of the state.”

Lester said Grassley dropped the amendment because Republican proposals were getting shot down. The Alliance will continue to push the prompt-payment issue.