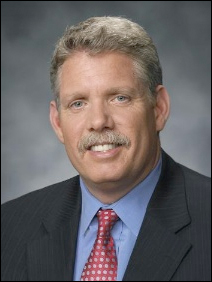 Twitter is a part of the corporate culture at Best Buy, and Dunn joined the service himself last September. It’s a space he can use to casually keep in touch with dozens of his employees and co-workers, from blue-shirted store employees to his chief marketing officer, Barry Judge.

Among the nation’s top CEOs, however, Dunn won’t find much company on Twitter. Even his meager tweeting habits appear to put him in a class of his own when it comes to Twitter and other social networks.

CEO ‘slackers’
A new research presentation — released coincidentally on the eve of Dunn’s appointment — concludes that Fortune 100 CEOs are “social media slackers.” The report by the UberCEO blog found a “miserable level of engagement” in social networks by top executives.

Only two — Warren Buffett and Procter & Gamble’s Alan Lafley — have Twitter accounts, and both are essentially dormant. Buffett has 7,441 followers but isn’t following anyone, and he’s only tweeted once. Lafley has 33 followers and never updated his feed.

Meanwhile, Dunn, @bjdsr, follows 29 people, and his feed, which is followed by 1,160 users, has been updated at least one to three times per month since he signed up for the service in September. 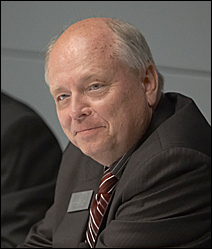 The frequency has fallen off some since late January, when it was announced that Dunn would succeed Brad Anderson as the company’s next chief executive. But he’s used Twitter to share updates as he traveled to the company’s stores and locations to meet with employees.

A tweet from Ankeny
A recent example from May 24: “To the BBY team in Ankeny, Iowa. I enjoyed my visit to your store last Saturday. Thanks for all your great work.”

Only 13 of the CEOs have LinkedIn profiles. None of them was in a top 20 company, and five of them had only one connection. Only three had more than 10 connections. Dunn: 463 connections.

Facebook is the most popular social network among the Fortune 100 CEOs. About 19 percent have profiles on the site, but these users have a “dismal number of friends.” Bank of America’s Ken Lewis: 13 friends. Wells Fargo’s John Stumpf: 12 friends. Best Buy’s Dunn: 1,539 friends.

Best Buy started to recognize the potential of social networking in recent years. I wrote an article for Twin Cities Business magazine in April about how the company came to embrace something called an “open/social strategy” — basically encouraging employees to be as open, honest and transparent as possible in their communications.

“As a CEO of a company that is aspiring to connect people through technology, he almost has to be participating — he wants to be. He wants to be a part of this,” said Best Buy spokeswoman Kelly Groehler. “He understands the importance of it.”

“All I can say is that if anyone knows the power of a network, it’s Brian,” Koelling wrote in an e-mail. “I do know that he is intensely curious and that’s never a bad thing in this space.”

Avoidance could risk company image
Fear, lack of knowledge and time constraints are the primary reasons top executives are not using social networks, the UberCEO blog speculates. By avoiding them, these leaders could be putting their own image and their company’s image at risk.

“[T]he top CEOs appear to be disconnected from the way their own customers are communicating,” the blog says.

“They’re giving the impression that they’re disconnected, disengaged and disinterested. No doubt regulations such as Sarbanes Oxley and Reg-FD make CEOs cautious about communicating freely, [but] they’re missing a fabulous opportunity to connect with their target audience.”