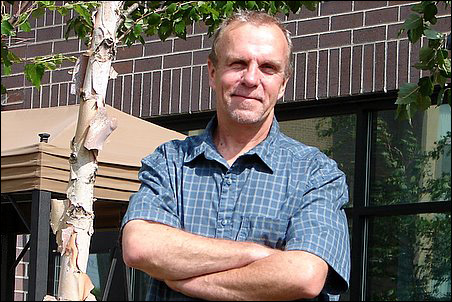 Clare Housing is at a crossroads. It provides housing and support services to people with HIV/AIDS. During the past decade this part of the nonprofit world has seen a fair amount of consolidation. Clare has several options as it contemplates its next big move.

Clare Housing was one of many mom-and-pop nonprofits that sprung up in response to the AIDS crisis. It had two homes and eight clients when it opened in 1996. It now has a $2.7 million annual budget. It runs six foster homes with 24 units, 20 scattered-site apartments and the 32-unit Clare Apartments in north Minneapolis, 76 units total. This March, it plans to break ground on the 45-unit Clare Hiawatha apartments in south Minneapolis. It should open in 2011.

Executive Director Lee Lewis said the organization is wrestling with the “What Next?” question. Does Clare Housing continue to build its own housing? Does it partner with a larger nonprofit housing developer that can pump out housing while Clare focuses on rent assistance and support services? Does Clare Housing seek regional partnerships with like organizations that provide housing services to people with HIV/AIDS?

That’s the topic for this fall’s strategic planning process. “It will be fun and interesting with a lot of big questions,” Lewis said.

A brief history
It’s not a sure thing that a new partnership will emerge from these strategic talks, but it would reflect an ongoing trend.

As part of the initial local emergency response to HIV/AIDS, some in the Twin Cities religious community simply began opening small homes to care for those who were “dying like flies,” Lewis said. According to a Clare House timeline, the Benedictine Brother Louie opened the first group home in 1987.

Some programs began expanding; Grace House II and Agape Dos opened in the late 1990s. Yet people began to realize that things could run more efficiently, Lewis said: “Each little house didn’t need an executive director and a program director.”

The mergers started a decade ago. In 1999, the Agape and Grace homes merged into AIDS Care Partners. That same year, Clare House took on the home started by Brother Louie (which was then being run by the Franciscan Brothers of Peace.) In 2005, AIDS Care Partners and Clare House merged to become Clare Housing.

“This little [nonprofit] sector has had more than its share of mergers,” Lewis said.

Money issues
Organizational growth brings complexity. The Clare staff that once focused on small-scale direct service needed to learn the intricacies of federal low-income housing tax credits, limited liability corporations and Section 8 housing contracts. It got some foundation backing to help build its institutional smarts. Clare has worked with Fieldstone Alliance in the past year to become more financially savvy about how to manage growth and budgets.

Traditionally, Clare just kept its extra money in a cash reserve. Now it is talking about creating a separate cash account, rainy-day fund, and capital and strategic-initiative reserves.

It’s considering new revenue sources, such as starting a consulting business. It could use its housing development knowledge to help other nonprofit organizations that are just getting started in supportive housing. (Initial estimates say such a business venture could gross $50,000 a year but also would eat up a chunk of Lewis’ time). Another option is to bring property management in-house instead of contracting out.

Clare faces the same financial crunch as other nonprofits. Lewis said the governor cut 2.5 percent from the Community Alternatives for Disabled Individuals program through unallotments. That is Clare’s most significant money source. Foundation support is down 40 percent. Like many nonprofits, Clare is seeking to boost individual giving.

And Clare is now in the process of interviewing consultants to help it with its next strategic plan. It could involve sharing backroom services, such as payroll. Some of the things potentially on the table, collaborations and partnerships, might require a change of mission. That, Lewis said, he has always held sacrosanct.

“When you get closer and closer to the edge of merger, whether it is another AIDS service organization or a housing organization, then mission comes into question,” he said. “That is a soul-searching discussion that board and key staff would have to have.”