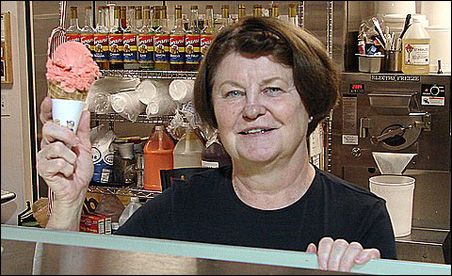 Shortly after Mary Johnson opened her Grand Italian Ice business in the Midtown Global Market in 2007, the health inspector told her she had to replace some specialty Plexiglas cabinet doors. They were cracked. That cost $800, which she did not have.

Then she got a no-strings-attached $1,000 gift from MicroGrants. It allowed her to replace the doors and add to her supplies. “It saved the business,” she said.

The business is still going, in spite of the economy. Johnson says she’s turning a profit: “But I’m not paying myself much.” She is one of dozens of people profiled in the new book, “MicroGrants: It’s Working,” edited by Jim Klobuchar, long-time Star Tribune columnist and MinnPost contributor, and Joe Selvaggio, who founded the MicroGrants program.

Selvaggio has launched several significant anti-poverty programs, notably Project for Pride in Living (PPL) and the One Percent Club. Founded in 2006, the MicroGrants program helps out industrious lower-income people who have an idea to improve their lives. Grants could pay for computers, home-based businesses, job training, tuition, or Plexiglas cabinet doors.

It’s like having a rich, benevolent uncle who believes in your potential.

College interns did the research and writing of the book’s mini profiles. Other grantees include Lisa Gomzales, who used a MicroGrant to help open Lots-A-Love Pet Grooming in Ramsey (it’s already expanded, adding a pet boarding service) and Abdi Abdirahman, who was trying to attend school and support a wife and son. The MicroGrant helped him pay for books and tuition at Lake Superior College, where he graduated from the respiratory care practitioner program.

“I love to meet these industrious people who want to climb the ladder and improve their lives and give them a $1,000 bump,” Selvaggio said.

How it works
MicroGrants grew from a conversation between Selvaggio and Tom Lowe, a friend and CEO of Lyman Lumber. According to the book, Lowe told Selvaggio: “I would like to help the poor by investing directly in the hard work and resourcefulness of individuals. For example, if I gave you money to buy a power lawnmower or snow blower, could you find someone who would use these machines to make a living?”

Selvaggio raises about $500,000 a year for the program. It funds five to 10 grants a week. Designated nonprofit organizations help identify good candidates. Applicants fill out a one- to two-page application listing their need, opportunity and a budget. The nonprofits screen applications  and refer them to Selvaggio (who goes with the recommendations). 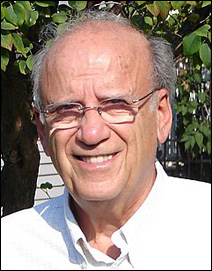 MinnPost photo by Scott Russell
Joe Selvaggio, founder of MicroGrants, at his home.

The program is similar to the microcredit program created by Muhammad Yunus and the Grameen Bank, which provides poor people with small loans to start businesses. Yunus eventually won the Nobel Peace Prize for this work. One key difference with MicroGrants is that recipients don’t repay the money. “In the United States, too many people — especially the poor — are saddled with immobilizing debt,” Selvaggio wrote.

Selvaggio hopes the program could be duplicated. “It is a nice, simple formula,” he said. “You get the nonprofits to give you the people and coach them and mentor them. You give them $1,000 each and you record their story. I think it could be franchised across the country.”

Different lenses
Selvaggio invited essays on the MicroGrants from different perspectives to include in the book. From the liberal side, Tom Fiutak wrote, “with each MicroGrant, a statement is made on behalf of hope and compassion with little regard for whether this one recipient will ‘do the right thing’ … There is no hint of guilt laid on the recipient.”

Conservative Mitch Pearlstein, founder and director of the Center for the American Experiment, gave MicroGrants a pat on the head, then launched into a discourse on marriage. “With the demonstrable virtues of MicroGrants notwithstanding,” he wrote, “a paramount question remains:  Is it possible to make more than marginal progress against poverty and too small incomes as long as immense numbers of households are led by single parents …?”

The book also includes a return-on-investment analysis written by John Mauriel, consultant and former professor at the University of Minnesota’s Carlson School of Management. As Selvaggio notes in the book and website, “Most affluent people like to see results from their investments.” So providing some kind of analysis seems key to keep the program afloat.

Selvaggio acknowledges mixed feelings about getting too analytical, trying to maximize return on investments for each grant decision.

Some people are stuck in poverty, he said. As long as they are improving their lives, helping their kids, and value education and hard work (and aren’t into drugs), that merits support.

“You can’t just look at how far the person goes and how much money they are going to make in life,” he said. “Some people go to the top and they still are selfish. They are spending it on themselves and buying two or three cars. … I like to fund somebody who is also generous and will pay it forward and give back to the community.”

There will be a book launch for “MicroGrants: It’s Working” on Oct. 1 at the Cowles Auditorium at the Humphrey Institute, 301 19th Ave. S., Minneapolis, from 5 p.m. to 7:30 p.m. Editors Joe Selvaggio and Jim Klobuchar and several grant recipients will discuss the MicroGrants program. Those interested in attending can RSVP at 823-2077 or joeshmo@qwest.net.

Grim news from economic survey
More and more people might need a MicroGrant boost, according to a poll released last week  the Northwest Area Foundation. www.nwaf.org According to a national survey: “two-thirds see more people struggling to make ends meet than a year ago, mostly because of circumstances they believe are beyond their control.” (Perhaps the surprising news here is that one third of those surveyed don’t see more people struggling.)

The poll oversampled in Minnesota, part of the foundation’s service area. It found that 63 percent of state residents say they’ve cut spending; 48 percent have cut retirement savings; 41 percent reported their work hours were cut; 27 percent had problems paying for basic necessities, such as a mortgage, rent or heating; and 23 percent have had a friend or family member stay with them because of a lack of funds.

Foundation staff hopes the data will be useful to nonprofits trying to reduce poverty. It has provided a new on-line tool to break down data in its eight-state region.