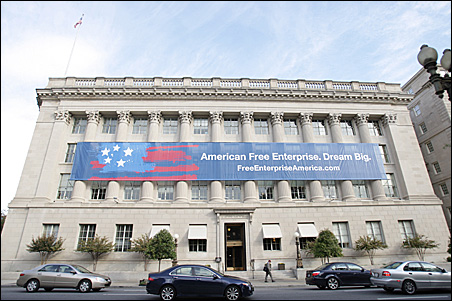 Greenhouse gases are trapping heat in our atmosphere and warming the planet at an alarming rate. Climate scientists believe if we don’t respond appropriately in the next decade or so, global warming will cause oceans to rise, disease to spread, droughts to prolong, storms and wildfires to intensify, and scores of species to go extinct.

The U.S. Chamber of Commerce, however, foresees a different apocalyptic vision: a future in which American businesses are forced to do their part to help avert the crisis.

The Chamber has turned up the heat on itself in recent months by making a series of statements aimed at killing a bipartisan effort to pass climate-change legislation in Congress. And the Chamber’s extreme position is drawing criticism by its members, from such global giants as Nike and Apple to a few local Minnesota firms that spoke out at a media event earlier this week.

The comment that ignited the firestorm came in August from the Chamber’s vice president for environmental regulation, who called for a sort of “Scopes monkey trial” for global warming science. (The Chamber later tried to take back the comment.) As the Boston Globe, Los Angeles Times and others have reported, the Chamber has called greenhouse-gas regulation “a job killer” that would “completely shut the country down” and “virtually destroy the United States.”

Arguing that a carbon tax or cap-and-trade program would “destroy” or “shut the country down” is no less off-base than the recent claims about health reform resulting in government-run death panels. It assumes Americans have zero ability to innovate or adapt, and it ignores the costs of doing nothing. (And, by the way, that public trial? It already happened. It’s called the Intergovernmental Panel on Climate Change, and you can read its latest report here.)

The Chamber’s attacks have cost it high-profile members and raised questions about how broadly the organization actually represents the views of businesses. Apple, Levi Strauss and the nation’s largest utility, Pacific Gas & Electric, have dropped their memberships. Nike resigned its seat from the board of directors, and other firms, including Microsoft, Toyota and Johnson & Johnson have publicly stated their disagreement.

On Wednesday, Clean Water Action attempted to show similar dissent among Minnesota business leaders. The environmental group organized a teleconference for reporters featuring three past or present local chamber members who favor federal climate-change legislation, though none packed the star power of a Nike or Apple. They were Doug Pierce, a senior architect with Perkins and Will in Minneapolis; Dave Danielsen of Conservation Technologies in Duluth; and Tom Gegax, an investor and business consultant who co-founded Tires Plus in 1978. 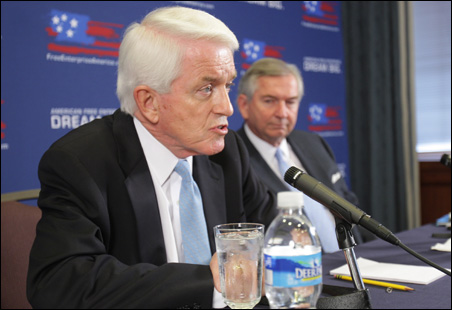 “Clinging to the status quo kills economies,” Pierce said. Energy-efficient buildings are a key part of Perkins and Will’s business, and Pierce said clean-energy legislation can help advance Minnesota’s economy and position the United States as a leader.

But if there’s a serious rift on climate change among Minnesota chamber members, however, it hasn’t reached Bill Blazar’s office. “What we’re hearing from our members is pretty simple: We want to reduce emissions without costing the state jobs,” said Blazar, the group’s public affairs and business development director.

Climate change isn’t a top-three priority among members, he said, and those who do rank it as a priority don’t see regulation as the best solution. The answer, in their view: building new nuclear power plants in Minnesota and finding ways to award and assist companies that voluntarily reduce emissions.

He wouldn’t answer a question about whether the Minnesota Chamber of Commerce accepts that global warming is real and human-caused. Instead, he said members accept that they should find ways to voluntarily reduce emissions. He cited the Chamber’s Waste Wise and Energy Smart programs.

“Those are two pretty significant initiatives that are well under way and didn’t require anyone to pass a law,” Blazar said. “We don’t need any more mandates or laws telling people to do it.”

What climate-change legislation would the Minnesota Chamber support? Blazar said they support repealing the state’s ban on nuclear power plant construction and changing the state’s definition of renewable energy to include large-scale hydro-power projects.

“Let’s lower our emissions, but let’s do it in a way that actually reduces emissions and does not hurt the economy and maybe even makes it better off,” Blazar said. “We’re going to pursue that path and hope that the federal government doesn’t get in the way.”

Getting in the way, however, doesn’t necessarily mean grinding the country’s economy to a halt. Sweden is the best example of this. The country has taxed fossil fuels to encourage the use of cleaner, renewable fuels. Between 1990 and 2006, the country’s emissions fell almost 9 percent while its economy grew 44 percent. Will Steger, speaking at a green business conference Thursday at the Mall of America, noted that many of the new jobs in Sweden have come in renewable industries, such as bioenergy.

Jenna Garland, a climate-change campaign organizer with Clean Water Action, says the Chamber doesn’t represent all businesses. “Clearly, these businesses leaving the Chamber or stating publicly that they support climate legislation indicates that the Chamber’s position is not representative of its membership,” Garland said.

Aveda, the eco-conscious salon and beauty-supply brand based in Blaine, was invited but unable to participate in the teleconference this week. In an interview, Chuck Bennett, Aveda’s vice president of earth and community care, said the brand, a subsidiary of Estée Lauder, hasn’t taken any official stance on the Chamber’s statements.

However, Aveda’s support for the 2007 renewable-energy standard passed by the Minnesota Legislature can be seen as reflective of the company’s values, Bennett said. Aveda supports aggressive action on climate change, he said, but its efforts are typically more focused on business practices than legislation.

Gegax is a past Chamber member who served as chairman and chief executive of Tires Plus for 24 years before selling the company in 2000. His split with the Chamber came shortly after that, when he resigned from the Minnesota Chamber’s environmental policy committee after serving just a few months. He hasn’t been a member since.

“I called it the anti-environmental policy committee,” Gegax said.

He quit after clashing with other members who were more interested in blocking environmental measures, he said, though he couldn’t recall specific examples of disagreements. “I had many people come up to me and say, ‘I feel the way you do, but I can’t risk [speaking out].’ There’s a lot of peer pressure,” he said.

Now, as then, he believes the Chamber’s official positions do not reflect the views of business owners as a whole.

“Typically, it’s: ‘Let’s not bother our economic engine for things that could be positive for the environment,’ and I disagree with that.”