While the worst of the financial crisis may have passed, Twin Cities area consumers are not ready to jump back into a holiday shopping frenzy, according to the eighth annual “Holiday Spending Sentiment Survey,” released by University of St. Thomas’ marketing professor David Brennan.

“The overall picture remains uncertain and pretty bleak for retailers as consumers hunker down and look for promotions,” Brennan told reporters Wednesday in a telephone call discussing the survey results.

Brennan, who teaches at the University’s Opus College of Business and is co-director of its Institute for Retailing Excellence, projects that spending in the important holiday period will drop 3.9 percent to an average of $637 per household from $663 in 2008. This is the lowest level of holiday spending projected since St. Thomas began the study in 2002. 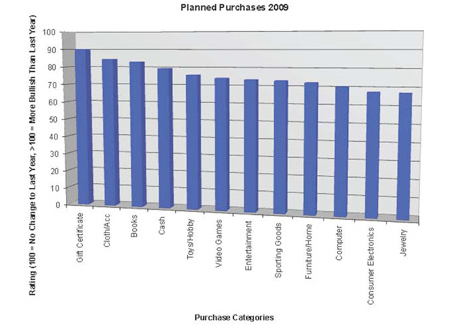 Consumers in the 13-county metro area will pump an estimated $810 million in aggregate spending into the regional economy, down 2.7 percent from $832 million last year, and “on the heels of a significant 10.9 percent decrease that was predicted the previous holiday shopping season,” the survey reported.

Brennan offered slim solace for retailers, pointing out that the decline in aggregate spending was not as bleak as the 10.9 percent decrease predicted in the 2008 holiday shopping season. Retailers, he noted, are sitting on lower levels of inventory this year, having been caught last year with too many goods and too few shoppers.

Metro area shoppers who plan to hold out for last-minute deals may be disappointed.

“We’re going to see promotions rolling out on a very logical and systematic basis throughout holiday spending period, unlike what we saw last November when retailers just started liquidating,” Brennan said. “They [retailers] were scared after the financial meltdown and stock market crash. We’re not going to see that kind of panic, but Black Friday will still offer lots of deals that will drive traffic to the stores,” he predicted. (Black Friday, the day after Thanksgiving, gets its name from holiday spending that traditionally pushes retailers into profitability.) 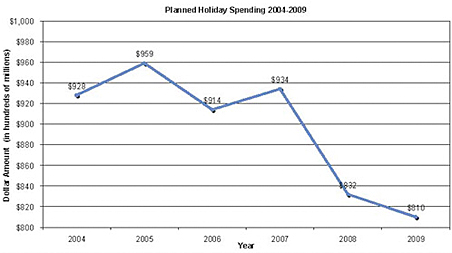 Regional malls and downtown shopping districts were named by 38 percent of respondents as a planned destination, up a bit from last year but down significantly from the 50 percent who chose it in 2005.

Almost 22 percent of households plan to shop online, nearly triple the number from the first survey eight years ago. Mega-site Amazon.com is favored by more than 37 percent of online shoppers, three times that of eBay, the next most mentioned destination.

Continuing a multi-year trend, catalog, TV and phone sales “continue to significantly decline” with less than 5 percent of shoppers planning to use those channels.

Gift certificates are predicted to be the most popular purchase for holiday shopping, followed by clothing and accessories and books. Perhaps reflecting the lack of any “must have” new gizmo, technology-related gifts such as video games, computers and consumer electronics did not make the top five, though they are in the top 10.

Target stores remain the hometown favorite destination favored by 38 percent of respondents, followed by Wal-Mart, Kohl’s, J.C. Penney and Macy’s. One in five respondents plans to shop at the Mall of America, putting the Bloomington megamall on top the second year in a row. Rounding out the top five shopping destinations in order were, Rosedale, Ridgedale, downtown Minneapolis, Southdale and Burnsville malls. Downtown St. Paul scored ninth, with 2.6 percent of respondents planning to shop there.

Asked about the laggard position of downtown St. Paul as an intended shopping destination, Dr. Lorman Lundsten, chair of the St. Thomas Marketing Department, said it was not surprising. “How do you compete with the Mall of America? … What is a surprise is that Macy’s still is still open in downtown St. Paul. 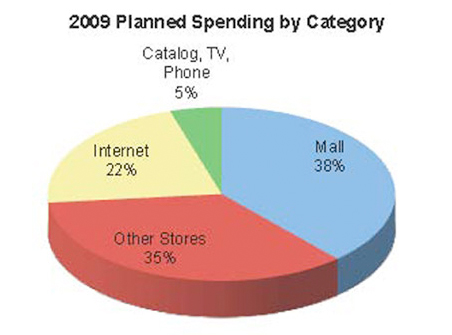 “What is clear is that people are spending less because of layoffs, wages being cut, hours being cut,” Lundsten said. “No mystery about that.”

He also credits the diverse regional economy with immunizing the metro area from a “double whammy” of reduced consumer spending and local layoffs at national retail giants Target and Best Buy. He pointed out that other major Minnesota industries, such as medical devices and agriculture, remain relatively healthy.

The metro area “is not like Detroit that has been crushed by the automotive industry collapse, or New York with the banks,” he concluded.

This year’s holiday spending survey included 303 responses from households in the 13-county Minneapolis-St. Paul Metropolitan Statistical Area, which includes two counties in western Wisconsin. It has a 4.5 percent margin of error.