The Minneapolis/St. Paul metropolitan area ranks among the most active in the nation in the number of delinquent or at-risk home mortgages that have been modified under the Obama Administration’s Homes Affordable Modification Program.

According to the U.S. Treasury Department (PDF), 11,627 Twin Cities Metro area mortgages, or 1.6 percent of the total loan modifications nationwide, have been modified under the program through November, making it the 13th most active metropolitan area. Minnesota, as a whole, ranks 18th among the states, with 14,154 loans modified, or about 2 percent of the total, up from 12,933 at the end of October. 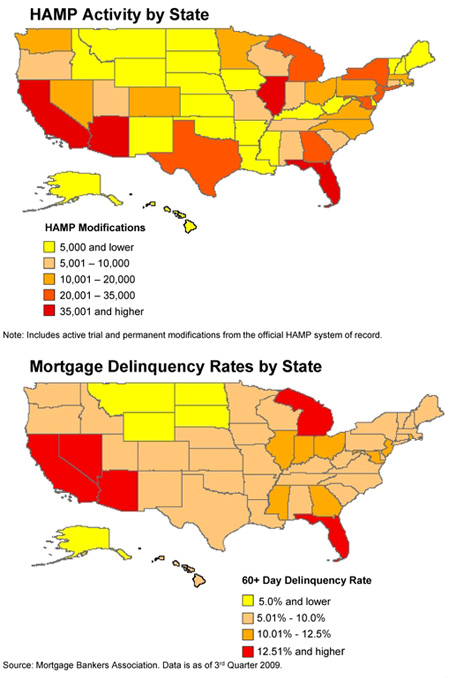 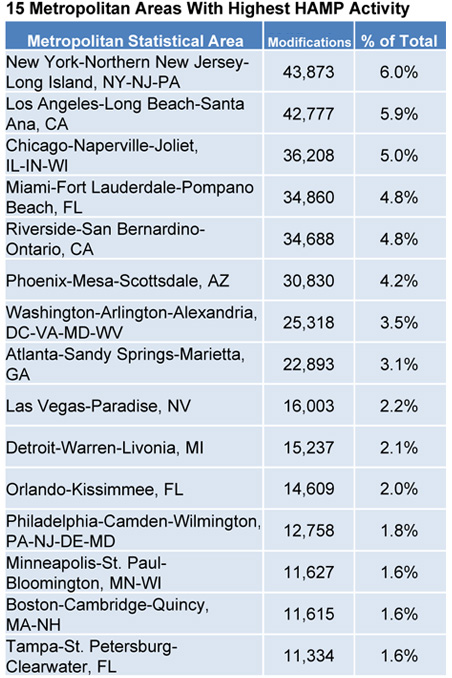 New York, Long Island and Northern New Jersey make up the top metro area in the country, with 43,873 loan modifications, or 6 percent of total modifications. Borrowers nationwide in the program are saving an average of more than $550 per month, according to the report.

The U.S. Department of the Treasury released its monthly report card on the federal program, which encourages lenders to modify mortgages that are at risk of default or delinquent 60 days. Loan modifications occur in a two-step process, starting with a trial modification that may be made permanent if the borrower stays current on the loan under new repayment terms.

For the first time, the treasury report includes a break-out of the 15 metropolitan areas with the highest program activity as well as the number of modifications that have transitioned from the trial to permanent phase.

When HAMP launched last February, the Obama administration said the program’s goal was to incentivize loan servicers to reduce monthly payments on existing first-lien mortgages for up to 3 million to 4 million at-risk homeowners. With more than 728,000 modifications under way across the country, treasury officials claim that the program is “on track to meet its goals over the next several years.”

However, the Treasury report states that that servicers have only converted 31,382 modifications to the permanent phase, despite most borrowers in modifications “meeting their responsibilities to make their payments,” according to the loan servicers’ own reports. Top Administration officials met with loan servicers in Washington, D.C., last week to urge a faster pace in converting borrowers to permanent modifications.

“As this report illustrates, struggling homeowners across the country continue to receive immediate relief in the form of reduced monthly payments and a second chance to stay in their homes,” said Phyllis Caldwell, chief of Treasury’s Homeownership Preservation Office. “Our focus now is on working with servicers, borrowers and organizations to get as many of those eligible homeowners as possible into permanent modifications.”

“Our challenge now is to keep the pressure on,” said William Apgar, HUD senior adviser for Mortgage Finance. “HUD-approved counselors are working with borrowers to ensure they are doing their part to transition into sustainable permanent modifications, and we will ensure that servicers convert as many of those modifications by the end of the year as scheduled as they are scheduled to.”