Hennepin County’s wage base dropped $42 million, or 3.9 percent, from June 2008 to June 2009, making Minnesota’s most populous county eighth nationally in the absolute decline of average weekly wages. It also ranked ninth in percentage declines, according to preliminary data from the U.S. Bureau of Labor Statistics.

The report highlights annual changes (PDF) in county employment and average weekly wages for the 334 largest counties in the United States and is based on total wages reported. 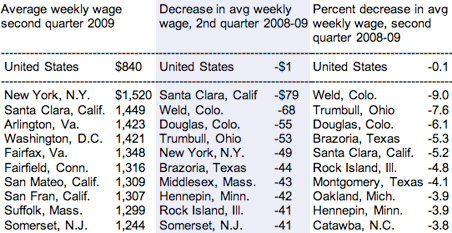 “Much of the drop in Hennepin County can be traced to a 24 percent drop in (total) management sector wages” in the county, according to Dave Senf, a labor market data analyst with the Minnesota Department of Employment and Economic Development.

The management sector is one of the largest in sheer numbers in Minnesota’s labor market and tends to have relatively high wages per worker overall, compared with most other sectors.  In addition, the lack of bonuses in the financial sector last year likely had a large impact, Senf observed.

Recently, Toby Madden, regional economist for the Federal Reserve Bank of Minneapolis,  suggested that the economy “hit bottom” in the third quarter of 2009, which means these statistics are measuring wage declines at or near the bottom.

Olmsted County also was highlighted in the BLS report for leading the nation in growth in average weekly wages, recording an increase of 10.8 percent from the second quarter of 2008. But that high ranking is “an annual event due to how Mayo reports their wage and salary employment data,” Senf explained.

In an email, he said that the surge in Olmsted results from “how Mayo’s bookkeepers keep track of their grants and … wage and salary payments. The big weekly average wage gain during the 2nd quarter gets smoothed out … when the data is looked at on a annual basis. As a result, Olmsted County makes the list of high average weekly wage gains every 2nd quarter.”

Much of the wage and job loss nationwide was attributed to declines in manufacturing and financial sectors. Nationwide, employment declined in 324 of the 334 largest U.S. counties or 5.1 percent overall across all 334 counties. Elkhart County, Ind., about 100 miles east of Chicago, posted the largest percentage decline in employment rolls, with a drop of 21.9 percent over the year. Yakima County, Wash., experienced the largest year-over-year percentage increase in employment rolls among the largest counties in the United States with a gain of 1.5 percent.

Weld County in Colorado posted a 9 percent decline in wages, the largest nationwide, driven by job losses in trade, transportation and utilities.