Minnesota could add 275,000 jobs over the next eight years, with nearly two of every three net new jobs coming in health care or professional and business services. State job growth of 10.3 percent would slightly outpace the expected national rate.

These conclusions are drawn from the Bureau of Labor Statistics biennial “Employment Projections for Major Industries,” recently updated to look at the nation as a whole over the 2008-2018 period.  Applying national trend projections (PDF) for employment growth and decline by industry and occupation to the state’s employment base paints a multi-layered picture of Minnesota’s workforce toward the end of the decade.

The good news for Minnesota is that four of the state’s top five industry sectors, which accounted for nearly two-thirds of the state’s total employment in 2008, are projected to grow in the coming decade, with the two big job gainers, health care and professional services, growing more than 20 percent over that period. 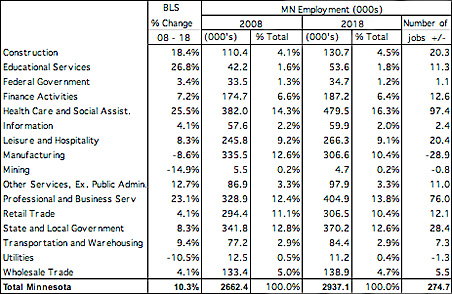 If the state simply follows the BLS estimated rates of growth or decline through 2018, health care and social assistance will add 97,400 jobs and keeps its spot as the state’s No. 1 employer with 16.3 percent of Minnesota’s workforce.

By the same calculus, professional and business services will climb to No. 2, gaining 76,000 jobs to 13.8 percent of the workforce. State and local government (which includes public school teachers) will add 28,400 jobs, but slip a notch from second to third place with 12.6 percent.

Minnesota’s manufacturing sector will be the big loser, shedding 28,900 jobs and slipping to fourth at 10.4 percent, tied with retail trade, which will add 12,100 jobs.

To come up with these numbers, I did a little “back of the envelope” calculation, with guidance from the State Department of Employment and Economic Development (DEED). The state will update its official state forecast latter this year, extrapolating from the BLS projections and adjusting for Minnesota-specific factors, such as the strong presence of medical device companies in the manufacturing sector or the education level of the Minnesota work force.

“As the Twin Cities goes, so goes the state,” Federal Reserve Regional Economist Toby Madden observed, pointing out that 70 percent of the state’s employment base is in the 13-county metro area.

But not every sector of the state will benefit equally. Some regions beyond the metro area face demographic challenges that remain daunting, such as Kanabec County, profiled in Sharon Schmickle’s MinnPost story here.

Nationwide, total employment is projected to increase by 15.3 million, or 10.1 percent, during the 2008-18 period, the BLS projected. This is a substantial increase over the 10.4 million jobs added or 7.4 percent growth rate in the 1998-2008 period. The relatively slow growth rate for the earlier 10-year period was affected by the recession, which began in December 2007. The projected growth rate is higher than would otherwise be expected, according to the BLS, because the 2008 starting point was at the depth of the worst recession in the post-World War II era.

The national projections show an aging and more racially and ethnically diverse labor force, with more than half of the new jobs in professional and related occupations and service occupations. In addition, a postsecondary degree or certification will be required in up to one-third of total job openings during the decade. Job openings from replacement needs — those that occur when workers who retire or otherwise leave their occupations need to be replaced — are projected to be more than double the number of openings resulting from economic growth.

While the longer-term outlook foresees job growth, it does little to soften the current difficult environment. The most recent snapshot of unemployment figures (PDF) — for December — shows an unemployment rate stuck at 10 percent nationwide and the economy losing 85,000 jobs.

The contrast brings to mind the oft-quoted quip by economist John Maynard Keynes, who, in the midst of the Great Depression, warned: “The long run is a misleading guide to current affairs. In the long run, we are all dead. Economists set themselves too easy, too useless a task if in tempestuous seasons they can only tell us that when the storm is past, the ocean is flat again.”