The Minnesota unemployment rate remained unchanged at a seasonally adjusted 7.4 percent in December, according to figures released this morning.

The state jobless rate was 2.6 percent below the U.S. unemployment rate, which also held steady in December at 10 percent, the Minnesota Department of Employment and Economic Development reported.

Minnesota employers trimmed 4,100 jobs in December. Over the year, Minnesota and the nation have both lost 3 percent of their jobs.

In a teleconference this morning with reporters, Commissioner Dan McElroy characterized the December job losses as “disappointing,” coming after reports of preliminary job gains in October and November. However, November’s reported gain of 2,100 jobs was adjusted in this morning’s report and now shows a loss of 1,500 jobs in the month.

“In terms of our trajectory, we’re in much better shape,” said Steve Hine, the department’s research director for labor market information. “In the level of jobs, we’re at the bottom. The rate of change, the direction of change is improving, but we still are facing a tough labor market out there … We have not seen signs of robust recovery yet. We are seeing some leading indicators showing a recovery may be just around the corner.”

Citing several positive leading indicators, he pointed to the number of new job postings on MNjobs.net, which hit a recent high of 21,000 up from a low of 8,000 last summer. Temporary jobs increased by 7,000 in December, an indication that employers need to add capacity. And unemployment claims dropped in December, compared with December 2008, the first year-over-year decline in unemployment claims since August 2008.

These positive indicators were offset by the 4,100 jobs lost in December and by a drop in the average work week, which slipped from 33.2 hours in November to 32.6 hours in December. Contributing to the job loss was a “surprising” drop in retail employment from November to December of 665 jobs (unadjusted) or 3,600 jobs (seasonally adjusted). “We have never had an unadjusted drop like that dating back to 1990, hence the surprise,” Hine said.

Five sectors added jobs in December, led by professional and business services, which grew by 3,900 positions, manufacturing up 1,000, information and government both up 300, and logging and mining up 100.

Month-to-month seasonally adjusted job losses occurred in trade, transportation and utilities (down 3,800, including the retail sector), construction and financial activities (both down 1,700), leisure and hospitality (down 1,300), education and health care (down 900), and other services (down 300).

On a year-over-year basis, the only sector showing employment growth is education and health services, with 4,800 jobs added. 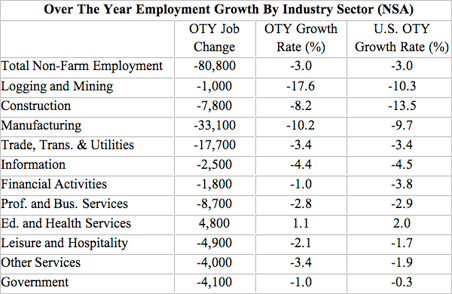 Notes:
• All labor force data are subject to revision.
• The unemployment rate is the percentage of people actively seeking work compared with those in the labor force (employed plus unemployed).