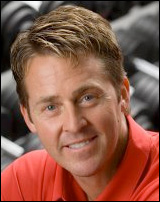 Peter Taunton has come a long way from selling popcorn as a 10-year-old in front of his father’s grocery store in Willmar, Minn. As CEO of Chanhassen-based Snap Fitness, Taunton is still giving customers what they want where they want it, but applying that formula — and breaking a few rules — to create a fast-growing $30 million fitness-center franchising business.

Honored Monday by the Association for Corporate Growth as the Emerging Growth Company CEO of 2010, Taunton described the path from popcorn stand to fitness-franchise success story.

Starting as the manager of a club in his hometown of Willmar that he eventually bought, Taunton ultimately built a multi-club chain which he sold.  With two decades of experience, he concluded that the industry “over-thinks” the fitness-club business model as he contemplated his next venture.

The traditional full-service club model did not cater to the customer “looking for a quick in-and-out” workout in a convenient location at a convenient time, he said. Heavily promoted but costly amenities — such as swimming pools, racquetball courts, climbing walls and nurseries — sat empty or unused much of the time.

He also wanted to offer features that would be difficult for the competition to emulate, so he built his model around 24-hour-a-day access, one employee per store, no membership contract and a low monthly fee.

He kept asking “how small” he could make each center to pare it down to the essentials for a cardio workout and strength training before customers would walk away.  The small footprint allowed him to locate centers in neighborhood strip malls. Today, 95 percent of members live within two miles of their club, he said.

He launched the new concept in 2003 with two centers. In 2004, he ventured outside the metro area to see if a smaller town could support his concept.  He achieved breakeven membership in 10 weeks and realized he had a valuable concept that he could franchise.

Admitting that he knew nothing about franchising, Taunton set out to create what he humorously terms “Franchising for Dummies.” His goal was to put systems and processes in place that could take operating responsibility out of the hands of the franchisees so they could focus on marketing and selling membership.

He surrounds his franchise owners with hand-holding and encouragement as well as in-house real estate expertise that provides site location help and multiple floor plans for different situations, a centralized billing function, a hands-on operating manual and detailed marketing calendar. As a result, about 60 percent of his franchisees are absentee owners, Taunton said.

Boasting a total franchise failure rate of 3 percent over the past seven years and a 30 percent membership turnover rate, below the industry average of 37 percent, he feels he has the right formula.

While the recession has slowed membership growth, the biggest challenge he’s faced over the past 18 months has been access to capital for franchise expansion. Taunton said that new franchise startup costs run between $160,000 and $200,000, with 50 to 60 percent of that financed.  Taunton is responding by offering banks a corporate backstop on 40 percent of the startup loan, typically about $100,000, and has put together 30 percent participation by equipment suppliers.

Like many small businesses, Taunton experienced the frustration of dealing with large suppliers who were not attuned to his needs as a growing small business. He negotiated a group purchasing arrangement with equipment suppliers, guaranteeing top-of- the-line equipment for franchisees while controlling costs.

When truckers ignored the necessity of having equipment delivered in time for an advertised launch, he created his own 18-truck fleet with drivers also trained as equipment installation technicians.

He launched a separate security installation operation for his franchisees after Honeywell was not responsive to his needs. That business is also now installing satellite television in the centers and shares in that revenue. Taunton is also hoping to launch his first digital advertising venture with Coca-Cola, though the deal has not been inked yet.

Youngest of seven, he fondly recalls growing up in Willmar as a “continuous summer vacation” and keeps his second-grade class picture in his office to remind him of how far he’s come.  Admitting that his fitness centers do not appeal to everyone, he confesses that his family also has a membership in a traditional club so his kids can swim and his wife can take group fitness lessons.

That has to be another rule broken.