Like a slow-to-start Minnesota spring thaw, the state’s improved job numbers are tantalizing, but the employment picture remains sobering.

Minnesota’s economy added 15,600 jobs in January, the largest one-month gain in state employment since April 2005, according to figures released today by the Minnesota Department of Employment and Economic Development (DEED).

In a conference call with reporters, however, DEED Commissioner Dan McElroy said that the job numbers were “only good news compared to the national rate. There are still too many people unemployed” in Minnesota and more job seekers than there are jobs currently available, he added.

“We’re encouraged by the improvement in the labor market,” McElroy said in a prepared statement. “The unemployment rate has been trending downward in recent months, but it’s still too early to say whether the state economy has reached a turning point.”

Minnesota’s jobless rate had been in the range of 4 to 4.5 percent for much of the decade before the recession hit, McElroy said.

Minnesota continues to have the highest labor force participation rate in the nation, climbing to 72.5 percent in January, up from 72.3 percent in December, compared with national rates of 64.7 percent and 64.6 percent for the comparable periods. The labor force participation rate is the percentage of working-age people who are employed or seeking work.

Eight of the state’s 11 industrial sectors added jobs in January, led by trade, transportation and utilities and by professional and business services, which added 4,000 jobs each. McElroy was particularly encouraged to see monthly gains in the hard-hit manufacturing and construction sectors, which were up 3,000 and 2,100 respectively, although those sectors have shed nearly 40,000 jobs combined from a year ago. 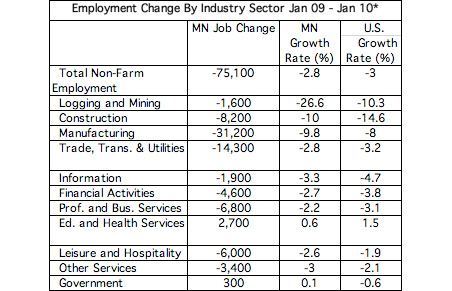 Other gains occurred in leisure and hospitality (up 1,500 jobs), other services (up 900), government (up 800) and information (up 500). Logging and mining held steady for the month. Two sectors lost jobs for the month: education and health services (down 700) and financial activities (down 500).

The only two sectors gaining jobs year over year were education and health services (up 2,700) and government (up 300). Another early indicator of an improving economy is hiring at temp agencies, which is up 5.1 percent from a year ago, McElroy said.