After more than three years of increasing unemployment, for the first time since June of 2006 the official unemployment rate dropped year-over-year across every major metropolitan area and all regions around the state, except in Mankato where the rate was flat.

At the same time, there were 62,000 fewer people working in Minnesota last month than a year before and the state continues to lose jobs. So what gives? Has the state jobless rate bottomed out or not?

One number does not make a trend. This isn’t Wall Street, after all. But the regional break out of February unemployment numbers released by the Minnesota Department of Employment and Economic Development (DEED) late Friday, does offer some tantalizing hints.

The Twin Cities jobless rate finally turned a corner and edged down 0.3 points to 7.7 percent after 40 consecutive months of year-over-year deterioration or no improvement.  The areas with the highest unemployment rates saw the biggest drops.  St. Cloud’s jobless rate dipped from 9.7 to 8.3 percent from February 2009 to February 2010. It ceded the “distinction” of highest unemployment rate to Duluth, which saw its jobless rate drop half a percent from 9.6 to 9.1 percent. 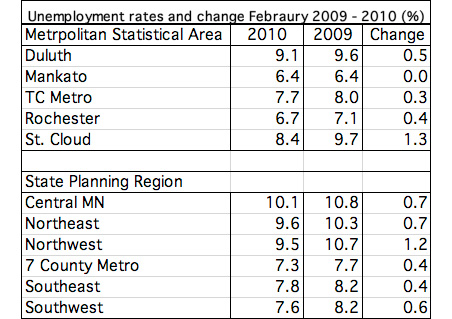 Looking beyond the metropolitan areas across DEED’s “regional planning areas” which group the entire state into six multi-county areas, the same trend held.

The sprawling 26-county Northwest Minnesota planning region saw the biggest drop, 1.2 points from 10.7 percent to 9.5 percent.  A largely rural region with no major urban centers, it stretches from Lake-of-the-Woods on the Canadian border to Pope and Stevens counties in the south.

The 13-county Central region, which includes the St. Cloud metro area, saw a 0.7 point decline but retains the highest jobless rate at 10.1 percent.  The Northeast region, including Duluth, also saw a 0.7 point decline as its jobless rate dipped from 10.3 to 9.6 percent. The Southeast region, including Rochester, dropped 0.4 points to 7.8 percent and Southwest, including Mankato, dropped 0.6 points to 7.6 percent.

So how do we square the lower number of employed with the lower unemployment rate? Month-to-month movement is less significant than long-term trends, but if we’re at a tipping point on unemployment, that’s good news even if it’s hard to see it in the current numbers. The Bureau of Labor Statistics compiled state by state numbers for February and deemed Minnesota one of the states where there was no statistically significant change in the unemployment rate.

The “official” unemployment rate only measures those actively seeking employment and is based on a sample of households. It does not measure discouraged workers and underemployed or part-time workers who would prefer to work full time. That more comprehensive estimate is called “U6.”  The latest estimate for Minnesota’s comprehensive U6 unemployment rate was 14.2 percent as of December 2009. The Bureau of Labor Statistics updates those numbers quarterly, so a new figure will come out next month.